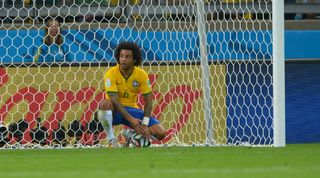 One of the nets - with the other one untouched - has been cut into 8,150 pieces. Each individual section is being sold for €71 (£62) to remain in keeping with the scoreline from the semi-final of the 2014 World Cup.

The net famously took a pounding from Germany in Belo Horizonte: five first-half goals from Die Mannschaft, and Oscar's 90th-minute consolation all struck the material on sale.

The Mineirao Stadium committee say they've set up the auction to spread an optimistic message across the country.

“The idea is to transform this traumatic incident that everyone would prefer to forget into something positive,” Mineirao’s director Samuel Lloyd told AFP.

The organisers hope to rake in at least €500,000 (£439,000) for charity – presumably all from a misty-eyed Miroslav Klose, who broke the all-time World Cup scoring record that day.

Brazil kick off their World Cup campaign against Switzerland on June 17 in Rostov. Germany, meanwhile, face Mexico in Moscow on the same day.