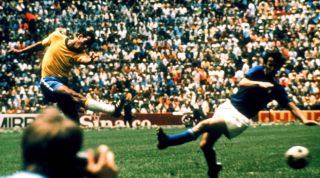 The man himself didn’t believe it was the most beautiful goal ever scored in a World Cup; he thought Diego Maradona’s non-handball goal against England in 1986 was more impressive. But Carlos Alberto Torres did concede that his master-blaster against Italy in the 1970 World Cup Final was the icing on the cake of the “most special team there ever was”.

“It was amazing because of the team play, not my finish,” the last goalscorer in that 4-1 win told FourFourTwo. The right-back and captain who lifted the trophy said the goal that sealed the deal in that game was also scored by coach Mario Zagallo.

“I noticed there could be a chance seconds after we stopped Italy and started that counter; Zagallo had told us that Italy would leave their left flank open if Jairzinho, Tostao and Pele moved to our left all at once,” Carlos Alberto told FFT. “When Clodoaldo dribbled through four Italians I started moving slowly forward. When Rivelino passed to Jairzinho it was very clear that the three brought their markers to the left. It was the only time [it happened] in the whole 90 minutes.”

The legendary full-back thought he would never score in the World Cup as he touched down in Mexico. But destiny was smiling to him minutes before the final whistle.

“When Jairzinho had the ball on the left edge of the box, I ran as far as I could. I knew Pele would come into action. In a different moment he could have used Tostao, just next to him, but he also knew the right flank would be free.” And then came his missile.

“It was only that good because the ball bounced on the pitch before I hit it and the stride was perfect,” said Carlos Alberto. “I think of that moment every day.”

This article was originally published in the February 2014 issue of FourFourTwo magazine.