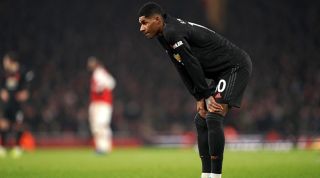 Football at this time of year comes with ready-made excuses. The Christmas calendar drains players, it leaves teams running on fumes and turn most of the games into a confused mess. But real as those asterisks may be, Wednesday night was still ugly for Ole Gunnar Solskjaer.

Because his Manchester United have been here so many times before. Not just beaten by a more vibrant side with a better, brighter and broader range of ideas, but reduced to passivity in a game of note.

United and Arsenal used to enjoy such a wonderful co-dependency. They were colliding armies that would smash into each other to the sound of twisting steel. This time, though, United saved their opponents the time. They fell on their sword in the first half, gave away two cheap goals before the break, and seemed only mildly affronted by their own surrender.

Nicolas Pépé gives Mikel Arteta's side the perfect start after a fine move down the left! #BTAllDayerpic.twitter.com/NGMBfR8Jhq— Football on BT Sport (@btsportfootball) January 1, 2020

Possibly that’s the most damning description of Solskjaer’s United. They’re so obviously fine with losing. They'd rather win, but they don't detest defeat in the way that teams of their lineage should. In this instance that was particularly disappointing. Wins over Newcastle and Burnley had created some fragile momentum and yet there was no determination to protect it. In fact, it was almost as if the six points garnered over those two games had created the context in which losing to Arsenal was broadly okay.

Whatever the case, it was predictable. The kind of game on which nobody staked a losing bet.

There was an inevitability in how Solskjaer conducted his players from the sideline, too. His expression sagged as the evening wore on and his hand gestures became increasingly benign, but even his substitutions had that air of futility which is becoming so familiar. On came Andreas Pereira to maybe do something, but probably not. Ditto Mason Greenwood, whose talent is certainly overwhelming, but who is generally just pushed onto the pitch in hope rather than expectation.

The 10 worst Premier League managers of the 2010s

What has become very clear is that he doesn’t control this team. Or, at least, that he doesn’t control the games in which they compete. When some coaches make changes from their technical area, the flap of the butterfly effect can almost be felt from the back of the stand. When Solskjaer sends on a youngster here and a veteran there, it feels incidental - almost like an anecdotal means of separating one dreadful Manchester United performance from another.

The lack of tension in United's strings - or at least Solskjaer lack of command over them - means that the team just ambles along. They don't get any better or worse. They aren't informed by their defeats or emboldened by their wins. They carry the same set of strengths and weaknesses into every game they play, but they have no way of adapting them to the Premier League’s unique and specific challenges. They never become any wiser for their experiences.

And that cannot be good enough, not for a club of this size. What United demonstrated again on Wednesday night was that unless an opponent exposes themselves to their counter – that one weapon they consistently carry – then their task can often become quickly hopeless. It’s true that Arsenal are a difficult challenge to prepare for at the moment, newly built and full of energy as they are, but it was also telling that no obvious plan seemed to exist to contain Mesut Ozil and no deference had been made to the way Arteta now has his forwards pressing. No tweak in formation, no clever selections to suggest that someone is thinking particularly deeply about their plight.

A great deal of money has been spent on this side. United are also in the fortunate position of having whatever resources are necessary to appoint a head coach who can extract the very most from it, by plying it with ideas and energising it with the promise of progress. Those realities make this situation wholly unacceptable – not the employment of Solskjaer and the tedium of whether he should or shouldn’t keep his job, but the matter of United’s organisational self-respect and how comfortable they are with being so submissive to everyone else.