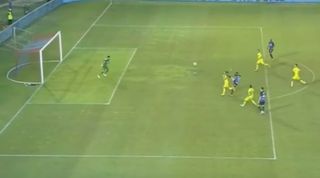 Inter Milan continued their strong pre-season with a convincing 3-1 win over the La Liga club at the Stadio Riviera delle Palme on Sunday.

Jovetic provided the game's most memorable moment just three minutes after coming off the bench, sweetly scissoring a volley into the top corner after a loose ball had fallen invitingly on the edge of the box.

The Montenegro international has been on the verge of a permanent exit from Milan all summer, with Sevilla, Fiorentina and Marseille all having been linked with a move.

Inter continue their pre-season preparations with a friendly against Real Betis next weekend. Their Serie A campaign begins on August 20 against Fiorentina.