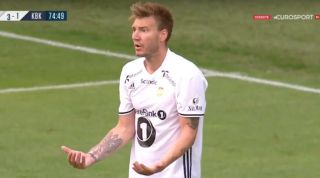 Bendtner is enjoying something of a career resurgence in Norway, and got on the scoresheet as Rosenborg defeated Kristiansund 4-1 at the weekend.

But despite striking to give his side a two-goal cushion, Bendtner lambasted team-mate Milan Jevtovic for not passing the ball to him in the first place, after the Serbian's initial shot deflected back off a Kristiansund defender and then fell to Bendtner.

In fairness, the former Gunner had a point – but it didn't stop team-mate Matthias Vilhjalmsson trying to literally force a smile from the 29-year-old Bendtner.