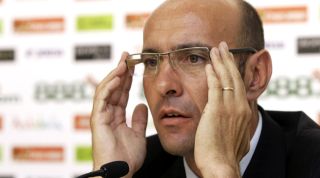 Football doesn’t award a Ballon d’Or to sporting directors, but if it did, Ramon Rodriguez Verdejo would be in Messi territory.

Monchi, as he’s better known, is a master of his craft. He is the king of regenerating at a net profit while still satisfying the trophy hunger of passionate supporters who demand success. In the last 10 years Sevilla have won four European titles, three domestic cups and mounted a league challenge that very nearly split Barcelona and Real Madrid. While countless players, managers, and even the club’s president have come and gone, the one constant is the man who builds the squads.

Monchi’s ability to spot not only a great player, but the right player, is unrivalled – be that an unpolished gem or someone whose talent wasn’t fully extracted at a previous club.

Beyond the bulging trophy cabinet at Sevilla, perhaps the greatest affirmation of his quality lies in the fact that he was the one who turned Catalan heads towards Dani Alves, Seydou Keita and Adriano, three important players for Pep Guardiola’s all-conquering Barcelona. He realised long before Barça that they were significant talents.

Increasing economic restraints at the Ramon Sanchez Pizjuan had many predicting Monchi’s magic would dry up, but after readjusting, the Andalucian is thriving once more. When Sevilla lost star players Jesus Navas and Alvaro Negredo in summer 2013, Monchi responded by putting together his third Europa League-winning team. When they lost Ivan Rakitic, Alberto Moreno and Federico Fazio last summer, he began assembling a side that has just moved level with Barcelona at the top of La Liga, completing the best-ever start to a league season in Sevilla’s history.

Monchi has made countless great signings but some were greater than others. Alves, bought for less than a million euros from Bahia, became Sevilla’s heroic playmaker from the wing in a team that won five trophies, before leaving around €35 million in its coffers when he joined Barcelona in 2008.

Freddie Kanoute, a lost man at Tottenham, was transformed at the Sanchez Pizjuan, departing in 2012 a club legend whose trophy haul is better than even Alves’s. With 136 strikes for Sevilla he has scored more for them than any other non-Spaniard, and lies fourth in their all-time scoring charts behind three players who all retired before the 1960s.

In Luis Fabiano, who had scored only three goals in a season with Porto, Monchi had the foresight to see another misused player and handed the Brazilian a new lease of life in red and white. Fabiano won six trophies at the Sanchez Pizjuan, his 108 goals placing him fifth behind Kanoute in the club’s all-time list.

Monchi isn’t restricted to spotting attacking talents either: as a former Sevilla goalkeeper, he must take particular pride in rescuing Andres Palop from a frustrating time at Valencia, helping him become Sevilla’s greatest keeper of the modern era. Palop won five titles in a year with the Andalucians, six in total.

The remnants of the ‘best Sevilla ever’ are now long gone, but the Sevilla sporting director’s brilliance continues. Ivan Rakitic was already a talented but raw attacker at Schalke when Monchi learned he only had six months left on his contract and promptly snapped him up for a mere €2.5m in winter 2011.

The Croatian became the finished article at Sevilla, moving permanently to central midfield and captaining them to a record-equalling third Europa League in 2014. Voted man of the match in the final, his sale to Barcelona last summer raised around €22.5m for the club.

While others stop to contemplate, Monchi acts, and his nose is usually sound. Time and time again he leaves bigger clubs looking like fools as he pays less for more, and if you believe the rumours, those big clubs now want to cut out the middle man.

The most intriguing suggestion is that he could be part of Augusti Benedito’s Barcelona presidential campaign in 2016. The role of sporting director may still be met with distrust in England, but in Spain, Monchi has a big reputation. Attaching his name to a bid may well be a vote-winner among Barça types tired of the misfiring Andoni Zubizarreta.

The trouble with money

The attraction is easy to see. Why pay significant money for the likes of Keita, Alves, Rakitic or Adriano when you could sign them first for less, extracting their quality for a longer period? There is one caveat worth considering. While Monchi’s balance is overwhelmingly positive, there have been a few stinkers, and they tended to occur when Sevilla spent more than usual.

At €12m, Arouna Kone was once the club’s record signing, but managed only two goals in four seasons. Abdoulay Konko, Ndri Romaric and Aquivaldo Mosquera, who also cost significant fees, are players the club would similarly like to forget about.

There is the risk that with more money to play with at a club like Barça, Monchi may not have the same capacity to hit the target consistently, but his biggest move of all goes a long way towards redeeming him. Alvaro Negredo, brought in for around €15m in 2009, remains Sevilla’s record signing.

He scored 85 goals and won the Copa del Rey before earning a €35m fee for the club in 2013, not to mention the ample joy he gave to supporters along the way. Negredo’s success only two years after signing Kone suggests Monchi learned pretty quickly from his previous errors.

With other clubs looking on in envy, Monchi made himself even more desirable this year when he spent six months in London improving his English. Taking six hours' worth of language classes daily, he also travelled around stadiums studying the "economic, administrative and sporting structures" of various Premier League clubs whose model he openly admires. As it happens, one such journey to Fulham led to him observing Gerard Deulofeu, then at Everton, who is now on loan at Sevilla. Not a minute was wasted in England.

So not only is Monchi exceptionally good at his job, but on top of his already-excellent French and Spanish, he now has a grasp of English, and can therefore negotiate in three of football’s most-spoken languages. Better still, he has studied the workings of English football. That begs an obvious question: could the Premier League tempt him to put a decade-and-a-half as Sevilla sporting director to an end?

Not easily, however hard Tottenham may try to lure him to White Hart Lane (if reports are to be believed). When asked recently where he sees himself in the future, his answer was "in the stands, with my scarf, enjoying being a Sevilla fan". How fortunate for them that their greatest asset is also a die-hard supporter.