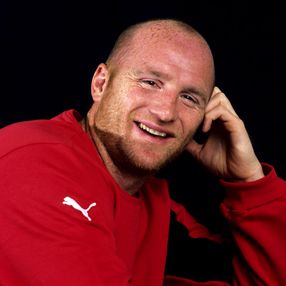 Hi John. The national emblem of Wales is a dragon. But how would you react if you got home one day and there was an actual dragon on your front drive, blocking your path to the front door?
Hi mate. I think I’d drive straight at it, for safety’s sake. I’ve got four kids. I drive a Range Rover, and they’re heavy vehicles, so if I drove at it fast enough and it didn’t fly away, I could take it out.

Wise. Do you reckon that, in your pomp, you could have beaten all four members of The Beatles in a scrap?
Hmm. My fighting days are over, and it’s not something I’d like to do. It would be horrible to hurt The Beatles. They’re a great band and I would rather listen to their music.

Us too. But in theory, you’d deck them all, right?
I don’t think so. There’s not much muscle on Lennon or McCartney, but Lennon might be feisty. And the other two, Ringo and George, are unknown factors. A Beatle could come round and blindside you. I think they’d beat me up.

What about the Bee Gees, John? Surely you could have pummelled the brothers Gibb?
Nah. It might be a bit easier than The Beatles, but it’s still three against one.

True. Are you any good at climbing trees?
I used to be – I was a compulsive climber. But when I was 11 I got right to the top of this massive tree and fell out. I came down in instalments, bouncing off branches every two feet. Bang… bang… bang. I was all over the shop when I hit the ground. I was lucky not to be killed. My mates had to get help. That was the end of my tree climbing days.

If cars were banned, and everybody had to travel round on animals, what would be your creature of choice? Champagne Charlie Nicholas plumped for the speedy ostrich.
I’d go for the giraffe. They’re nice-natured and you’d feel pretty good strolling round on their back. You could see whatever is coming from miles away, and it would be great for snooping into your neighbours’ garden.

What little hair you have left is red. Who would you say is the greatest redhead of all time?
There’s Lulu and Gordon Strachan, but I’m going to go for Russ Abbot in his comedy Scotsman’s outfit [character’s name: CU Jimmy]. That was brilliant. I was in Glasgow for five years, so I met enough real-life versions of him.

Bonfire night is soon. After five pints, have you ever returned to a lit firework that hasn’t gone off?
No. I’d never do that. I’m pretty safety conscious, what with the kids, so I’d want to set an example – don’t do it!

How long do you reckon you could spend in a cardboard box?
Oh, not very long at all. I’d start getting bored and impatient. I like my home comforts – a can of Coke and some Sky TV. I’d be straight out.

On to more serious questions. What’s the best format to eat a potato?
There’s chips, but I like a boiled potato with a steak. Cut it into four segments and then mash it up with the fork. That way you can get a bit of steak on the fork at the same time as the potato.

Lovely. Nice. Now, you recently cheated death. In your darkest moments, did you ever lie there composing a speech for the Pearly Gates, explaining why they should grant you entry?
I didn’t get to that point, although it got grave and I asked to see my kids. But I do believe in reincarnation. I reckon if you live your life badly, you’re going to come back as something rubbish, like a bat. But if you do right by people and bring your kids up well, you may come back as something decent.

What would you like to come back as?
A footballer again maybe, or a superhero. Superman was always my favourite, so I’d like to have some great powers that I can turn on and off, and have a fly about.

Sweet. Thanks for chatting. Any chance of a hug down the phone?
Of course. Have as many hugs as you like!

Interview: Nick Moore. From the November 2010 issue of FourFourTwo. Subscribe!