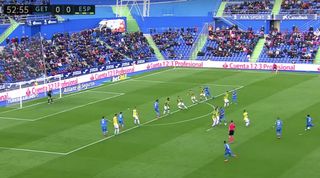 In the 53rd minute, Suarez was teed up by team-mate Faycal Fajr before the 29-year-old unleashed a ferocious drive towards goal which dumbfounded goalkeeper Pau Lopez.

Take a bow, indeed – not a bad way to score your first goal of the season.

Shortly afterwards, Getafe's Mathieu Flamini, formerly of Arsenal, was sent off in the 61st minute after receiving two yellow cards in quick succession.

But that did little to dampen spirits among the home side, who walked away with a 1-0 victory as Espanyol failed to record a shot on target.

Getafe's 1-0 win at the Coliseum Alfonso Perez moved them up to 10th, while Espanyol dropped down to 16th.