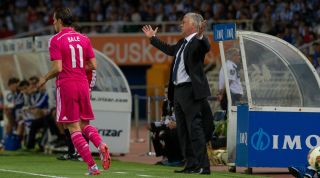 Friday night fun, midnight madness and Real Madrid being unable to defend crosses. The second round of La Liga had a familiar feel to it, aside from Valencia not kicking off a campaign in complete crisis. A solid Barcelona lead the table going into the international break, with Levante propping things up. Here’s what else we learned from the sunny land of Sangria over the past three days...

Real Madrid are in for a very sticky fortnight

Well, that was unfortunate timing. Real Madrid now have two whole weeks to stew in a broth of uncertainty after committing a whole list of crimes during their 4-2 defeat to Real Sociedad. In the hot-headed world of La Liga, those 15 days are going to feel like 15 years for the football club/boy-band hybrid.

First off, there was the whole blowing an early two-goal lead thing. Then there was allowing four goals to be conceded without reply. And for a big cherry on top, add in the fact that yet more strikes were conceded from set-pieces, primarily because the full-backs are a little bit wee.

Losing the first away game of the season to a team that was playing in Russia on Thursday, and suffering a miserable week all round, is clearly not a great place to be – especially in Spain with an awful lot of pages to write and airtime to fill.

“Something has to change and will change,” stormed Carlo Ancelotti after the loss. Bringing in Chicharito to shore things up at the back and in central midfield probably isn’t going to do the job, LLL suggests.

A fairly promising start to the season for Barcelona. Two fairly comfortable victories – although the winner against Villarreal was a little late in the day – and the defence looking very solid despite the reappearance of Gerard Pique in El Madrigal. Claudio Bravo has yet to concede a goal and the whole team are putting in a shift at the back. The blog was nodding its head in admiration with little Munir slogging in a tackle on the edge of his own box to set up a counter-attack.

The other point to note is that Luis Enrique is quite happy to keep the big hitters away from the pitch and stick with what works, hence Neymar beginning Sunday’s clash from the bench with Pedro, Messi, and Munir leading the line.

Atlético Madrid are going back to basics

Until Atletico sort themselves out with their new players and rather spiffing attacking line-up – Alessio Cerci is going to be a fine addition to that – the Rojiblancos are sticking with the basics. That comprises of hitting teams from set-pieces and squeezing everything out of Raul García. The 2-1 win over a lovely Eibar side was achieved via headed efforts from a corner and and a free-kick. “We have to improve and the way to do that is through hard work,” noted Diego Simeone, whose team already have a one-point lead over Real Madrid.

Valencia’s overhaul is going to plan

The club will probably take a season or two to really come together, once the supposedly large investment kicks in, but new boss Nuno has already made a fine start. A gritty point at Sevilla last week was added to with three more in Mestalla's season debut victory against Málaga. Despite a few changes to the squad, the three goals against the southern side came from players already at the club who just needed a new lease of life: see Pablo Alcácer, Dani Parejo and Pablo Piatti.

Valencia are now going into the international break in a very happy second place, which is quite unusual for the club that's had a recent and very entertaining habit of early-season crises and managerial firings.

Athletic have started to enjoy themselves

The big theme of Athletic’s start to the season has been relief about Champions League qualification. That release of tension was evident with the celebrations after victory over Napoli, and with the ease of the win over Levante where the Basque club did what they do best – score goals from set-pieces, and physical hustling. “This break is going to do us good for all the tension that we have picked up,” admitted coach Ernesto Valverde.

Eibar have already scored the goal of the season… for this week, anyway

It is a bit of a cliché to suggest that had this effort been scored by Leo Messi or Cristiano Ronaldo, there would have been quite a kerfuffle. Instead Abraham's strike against Atlético will be more anecdotal, but nonetheless it was a beautifully curled finish.

An awful lot of players are shed by the youth systems of Real Madrid and Barcelona, which is not too surprising considering the recent trend of both teams to go for names over home-grown players. And before those of a Catalan bent start frothing, just consider what happened to Thiago last summer. However, it doesn't mean those players aren’t much cop. Three of this cluster popped up over the weekend in the 2-2 draw between Deportivo and Rayo Vallecano with José Rodríguez, Alberto Bueno and Isaac Cuenca scoring four goals in the clash.

Is this the beginning of the end for Levante?

No goals, no points, no hope. Oh dear. Poor Levante have not had the best of the starts to the season, and it seems that their once-held refusal to go down has already been lost this season. They were taken apart rather comfortably by Athletic Bilbao on Saturday, leaving the Valencia outfit bottom of the table.