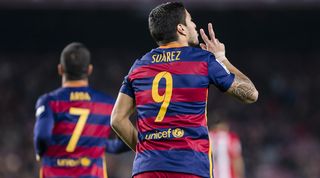 After last weekend failed to deliver any drama whatsoever in La Liga – the top three clubs went through their normal ablutions and polished off their respective opposition – the blog is expecting big stories ahoy this time around, with potential for everyone to scatter points around like Pringles caught in an English summer breeze.

The most reliable of the grouping, Atlético Madrid, are perhaps safest with a home match against a flakey Sevilla. But be warned, Barcelona and Real Madrid, for soon doth come possible trouble...

One of the main reasons that Atlético are top of the table – aside from Barcelona having played one game fewer – is the unrelenting consistency that their Catalan rivals seem to lack. It’s a consistency that may have the vibe of a grey, driverless footballing steamroller, but it’s effective nonetheless.

The Camp Nou club are still lacking this power of the trundle – they’re capable of great heights and great troughs, as recent dropped points against Espanyol and Deportivo will attest.

An away trip to Málaga has that same feeling, in a clash that could be more than taxing on Barcelona (something Javier Mascherano will know all about). After a spell last year in La Liga’s crisis chair, Málaga have really turned their footballing frown upside down of late with just the one defeat in their last eight games under Javi Gracia, who seemed to be a cat’s bum fluff from the chop just a couple of months ago.

It’s a game which may require a guts-and-glory 1-0 win from a set-piece. Or maybe just another 6-0 blowout. Could go either way.
Málaga vs Barcelona: Saturday 16.00 CET

LLL’s spidey sense was tingling this week that the rather rapid sacking of Rafa Benítez was down to La Primera’s fixture list, more than Florentino Perez waking up one morning and wanting something to brighten up his day.

The two matches following the trip to Mestalla were perfect on paper for Zinedine Zidane to bed himself in as Real Madrid boss, as well as for Benítez to build up credit that he should have stayed. And so it came to pass, with Deportivo and Sporting rolling over very helpfully in the Santiago Bernabéu and 10 goals plundered.

But now Zizou – who has apparently achieved perfection already according to AS – has to take his Gareth Bale-less band to Betis. As it happens a match against the Seville side might not be that bad, what with Betis having both sucked and blown with just one win at home all year in la Liga – one of the main reasons why Pepe Mel was recently jettisoned.

RECOMMENDED Can Cristiano Bale out Real Madrid and outshine Benzema for good?

Should Real Madrid manage another cricket score, LLL suspects that it will mean one of two things. First, that the Frenchman is a true managerial genius. Secondly, that Ronaldo & Co. were doing their darnedest to scupper Rafa’s reign at the club by downing tools for much of the season.
Betis vs Real Madrid: Sunday 20:30 CET

Oh dear. Another day, and another failure to win for Gary Neville. The Englishman must be on the brink of throwing his metaphorical handset down and rebooting the whole Valencia Manager 2016 lark. The latest stutter was Wednesday’s 1-1 home draw against lowly Las Palmas in a Copa del Rey quarter-final first leg, though Neville did say post-match that he was pleased with the overall vibe of the team (apart from the anxiety up front). Yes you, Alvaro Negredo.

While there is still no question of an early end to a club coaching debut for Neville, Valencia have made more moves to provide some Spanish balance to the club’s heavily English contingent. Last week, Jesus García Pitarch returned to the club as sporting director. Former winger Vicente was added to the coaching roster, but probably not in the area of player fitness judging by the ex-Brighton player’s general injured state during his time at the club.

However, the shadows of Rafa and newly freed-up figure of Jorge Sampaoli, the former Chile boss, means that the Neville brothers will need to start picking up points to appease the notoriously noose-happy Valencia support. That may not happen straight away, though, with a tough-looking trip to Riazor to face sturdy Deportivo on Sunday.
Deportivo vs Valencia: Sunday 18.15 CET

Will Granada be next to wield axe on another Primera neck?

The combination of Granada being just one point from the relegation zone and being bamboozled 5-1 by Eibar on Monday had LLL primed and ready for another sacking. But Jose Ramón Sandoval remains at the helm apparently with the players’ backing. “The dressing room is completely behind the gaffer,” announced midfielder Rubén Pérez.

Sandoval probably has just one more chance to keep his job, though, with Getafe visiting on Saturday. Normally that would be a great reason to be cheerful, but the Madrid club are weirdly effective these days having managed three wins in a row.

Another blow is the absence of one of the finds of the season in outstanding Venezuelan youngster Adalberto Peñaranda, who is out of action for three weeks.
Granada vs Getafe: Saturday 20:30 CET