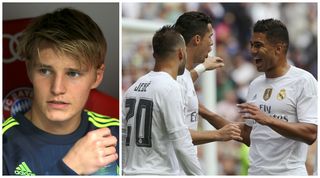 Asensio can do no wrong at the moment. A year ago, the teenager was playing his first full professional season with Mallorca in the second division, where he delivered moments of genius that gave fans of an otherwise abysmal side the odd thing to smile about. Real Madrid subsequently came calling, and sent him on loan to Espanyol.

Making light work of his first year in La Liga, the playmaker has notched up 10 assists in all competitions, more than any other Blanc-i-blau player. Standout moments include a hat-trick of assists in one game against Betis, as well as creating his team’s only goal in their Copa del Rey tie with Barcelona. Asensio has proven that he is good enough for a chance at Madrid next year. The only doubt is whether there is room in his position.

Once considered the most exciting homegrown talent in Real Madrid's squad, injuries and irregular playing time have hampered Jese’s development since he exploded onto the La Liga scene with a string of jaw-dropping performances in 2014.

Fortune hasn’t favoured Jese much lately, but Madrid’s transfer ban could give him the break he needs to establish himself as a first-team regular. In his usual position on the left wing there will still be plenty of competition, but centre-forward is a different entity. With Karim Benzema currently the only pure striker in Zinedine Zidane’s squad, Jese may find there is a clearer road to regular action if he can resume the central position he sporadically played in at Real Madrid Castilla.

A year ago Real Madrid beat a host of European clubs to the signature of a player who aged 16 was revolutionising the footballing landscape. Despite his youth, Odegaard had already made light work of Norway’s Tippeligaen by the time los Blancos came calling, outclassing players twice his age with the technique of a Brazilian and the invention to match.

Since then, things haven’t come quite so easily for Odegaard. His first year in Spain’s rough-and-tumble third tier was marred by inconsistent performances, the Norwegian resembling exactly what he was: a young boy in a strange country.

Madrid’s plans for Odegaard are for the long-term, however. If Castilla gain promotion to the Segunda Division, the youngster will be able to learn his trade in a more balanced environment, and if he can take that on board, first-team action isn’t out of the question. With no new bodies being brought in during the summer, chances for B team players are likely to come in the Copa del Rey in particular. Can Odegaard make sure he’s one of them?

It’s no secret that Real Madrid’s midfield lacks balance. While Zidane has an abundance of No.10s available, the Frenchman is almost devoid of players suited to a deeper role, a situation not dissimilar to the one he experienced as a Madrid player when Claude Makelele was sold.

The coach has to try to solve that problem without a summer transfer window to operate in, so next season would be the perfect time for a deep midfielder already on the books at the Bernabeu to stake his claim. Lucas Silva is one such player. Signed in January 2015, the Brazilian has been on loan at Marseille this season gaining necessary experience, and will return to his parent club later this year.

At the moment, he has his work cut out. Having played only intermittently since November, Lucas needs to make a major step up in the next few months if he is going to take advantage of a rare window of opportunity in the summer.

By the time 2016/17 rolls around, Real Madrid’s starting centre-back pair of Sergio Ramos and Pepe will have an average age of 32. With the former injury prone and the latter losing his pace, it isn’t a sustainable situation for a club that aspires to win everything.

The player best positioned to seize a starting spot from either player is Raphael Varane, but if the Frenchman does that, Madrid will still need another reliable back-up option in his position. That’s where Nacho comes in. Despite looking like a competent, no-nonsense defender whenever he has been picked for the Madrid first team, the Spain international can’t hold down a regular squad place at the moment. The transfer ban could help change that.

Even by the standards of a Real Madrid player, Casemiro’s last few years have been a roller-coaster. Depending on the whims of his president, the midfielder has swayed back and forth from the brink of a major breakthrough with the first team to persona non grata.

Despite making a string of eye-catching cameos at the tail end of the 2013/14 season, he was soon discarded and loaned out to FC Porto the following summer. Excellent displays in Portugal earned him a Madrid recall, however, and in the early days of Rafa Benitez’s tenure he became a constant, starting eight games in a row between September and October 2015.

Yet even Rafa’s love couldn’t endure, and when it came to the crunch, the coach bowed to presidential pressure and dropped his rock in the middle for El Clasico. It was perhaps no coincidence that Madrid conceded four goals in that game.

Now Casemiro finds himself in the position of being the only pure holding midfielder in Real Madrid’s squad, and unlike Lucas, he has proven himself at a high level this season. Unable to sign an alternative, will Zidane give him another chance to prove his worth?

Like many Real Madrid academy products, Vazquez had to leave the club in order to make his name as a player. The result was an excellent breakthrough 2014/15 from the winger at Espanyol, which was enough for Benitez to request his return to the Bernabeu for this season.

The Galician has looked more than competent when given a chance to play, and the transfer ban means those chances could soon increase. Combining pace with a good end product, Lucas could be a natural back-up to Gareth Bale on the right wing.