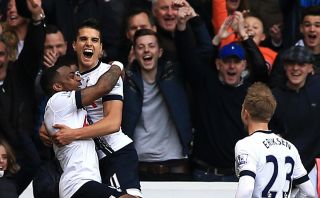 It's less than a year since Erik Lamela was widely regarded as a £30m flop at White Hart Lane, the product of an ill-advised Andre Villas-Boas spending spree that also delivered the likes of Paulinho and Roberto Soldado.

Following Gareth Bale was never going to be easy, and Villas-Boas was unable to get the best out of the Argentinian signing from Roma. It took Mauricio Pochettino a year too, and there were times even last season when many wrote off Lamela as a showpony known only for the occasional rabona amid a sea of disappointment.

How things have changed now. Not for the first time this term, Lamela played a pivotal role for Spurs in this game, just when they needed him most. That role was as much about defensive work as his threat going forward - something that would never have seemed possible a year ago, and a sign of just how Pochettino's philosophy has impacted on Lamela.

The wide man completed a highly impressive nine out of nine tackles in this game - four more than anyone else on the field - and eight of them were in defensive areas as he got back into position to help right back Kyle Walker, with Manchester United focusing much of their attack on the left flank through Anthony Martial. Lamela also made seven ball recoveries during the game.

And when Tottenham took over late on, Lamela was at the heart of it. It was the Argentinian who sent in the pinpoint free kick for Toby Alderweireld to head home the second goal, before adding the third himself with a crisp finish from Danny Rose's centre, rounding off a sweeping move for his 10th goal of the season.

2. Darmian no replacement for Fosu-Mensah

Manchester United actually did okay for large parts of this game, edging the possession stats and looking like recording their 16th clean sheet of the season.

Louis van Gaal's men seemed set to maintain their respectable record against teams in the top four this season - three wins, two draws and one defeat. But in the end this match ended up like their one defeat, a 3-0 loss in north London, to Arsenal.

A big reason why things fell apart was the injury to 18-year-old right back Timothy Fosu-Mensah, forcing him off in the 68th minute. Until then Fosu-Mensah had been fearless, making five interceptions and five key tackles. One stopped Kyle Walker in his tracks as he was bearing down on goal in the first half, another was a particularly crunching challenge on Dele Alli.

On in his place came Matteo Darmian, one of the main culprits in that 3-0 loss at Arsenal in October. The Italian had a nightmare again at White Hart Lane. Within eight minutes of his introduction, United had conceded three times.

The first came after he found himself too close to his centre halves, allowing Christian Eriksen to race outside him and cross for Alli to score. The second goal came from a free kick after he had earned a yellow card for a foul on Harry Kane. The third goal came after he failed to stop the rampaging Danny Rose from getting a cross in, allowing Lamela to do the rest.

As far as cameo roles go, this one was pretty disastrous.

3. Spurs showed they could respond to Leicester

Tottenham do not play on a Saturday now for the rest of the season, and their next four games will all take place after Leicester's result is already in. This match was a good gauge of whether they could respond to their title rivals, who had won 2-0 at Sunderland hours earlier.

That extended the gap at the top to 10 points and, while Leicester certainly aren't used to the pressures of a title race, it must be remembered that Spurs aren't either - something that could work in the Foxes' favour. This is not like 1996, when Newcastle were unable to hang on to a healthy lead over title race veterans Manchester United.

For a period this afternoon, it looked like Spurs weren't responding well at all. They struggled to get into the match early on - needing 16 minutes to complete their first pass in the final third. Dele Alli and Eric Dier were unusually quiet, giving away possession frequently.

As the game went on, you started to wonder whether the pressure was starting to get to this young Tottenham team, but that question was answered emphatically in the final 20 minutes. Alli may not have done much up to that point, but his opening goal proved he could deliver even on a day when he was not at his best.

By the end, even though Manchester United had 53 per cent possession, Tottenham had peppered the visitors' goal with 16 shots, compared to United's five. It was hard to argue that they didn't deserve to win. Christian Eriksen created four chances, and Mousa Dembele topped the ball recovery stats with 13.

Pochettino said: "It was important for us after the Leicester result to show personality and maturity. It was another step forward for this young squad, to play with pressure and try to close the gap. We showed a message that we are there, waiting and fighting."

Louis van Gaal faced a grilling from the media after this game, with one journalist asking him whether he now regretted joining Manchester United rather than Spurs in 2014, having believed at the time that United were ahead of Tottenham in terms of stature.

"I think we are still ahead," he retorted. "The challenge is always bigger in a bigger club. I liked also to sign for Tottenham, Daniel Levy knows that, but the challenge was bigger at Manchester United and shall always be bigger. Manchester United is a bigger club and I think that's a little pathetic that you asked that because they won 3-0. It's easy to ask that, but OK, you enjoy yourself."

Van Gaal also came under fire for his surprising decision to bring on Ashley Young up front for the second half in place of Marcus Rashford, rather than playing Young in his preferred position on the wing and moving Anthony Martial into a more central role.

One wonders what Memphis Depay made of that decision, too - given that he can play out wide or up front, as he has done for the Netherlands. Depay was already behind Rashford and Jesse Lingard in the pecking order, so Van Gaal's decision to ignore him and bizarrely play Young up front must have set further alarm bells ringing for the former PSV man. Young failed to have a shot on goal during his 45 minutes on the pitch, and made no more impact than Rashford.

Depay was finally summoned to the touchline but as he stood waiting to come on, Spurs added a third goal and the game was over. He looked visibly livid, and that frustration boiled over when he did get on to the field, as he got himself involved in a scuffle with Kyle Walker.

Explaining the introduction of Young up front, Van Gaal said: "I wanted more running in behind. We had chances to do that because Tottenham are like us, an attacking side with full backs who are coming up. You need running and Ashley Young has done that very well in the second team. Marcus did not have his best match today and that's why I changed it.

"Anthony Martial is more a player who wants the ball at his feet. When I want runners in behind, it's better to give a player the chance to do that who is willing in his head to do that."

5. Alderweireld scores against all the top teams - except Leicester

Louis van Gaal admitted he had warned his players before this match of the aerial threat posed by Toby Alderweireld, assigning Marcos Rojo to mark him. But being aware of the threat and stopping it are two different things.

The centre back has scored four goals this season and all have come at home to sides in the top six - netting at home to Manchester City, West Ham, Arsenal and now Manchester United. Of the top sides, only Leicester have managed to stop him. Maybe that is yet another reason why they're top of the league.

Alderweireld was reunited with Jan Vertonghen for this game, with his Belgian central defensive partner making his return from a knee injury. Kevin Wimmer had proved an able deputy in Vertonghen's absence, but the Belgian duo picked up where they had left off as they shut out United.

Alderweireld completed eight clearances, more than anyone else. Anthony Martial's second half shot, saved by Hugo Lloris, was the visitors' only real chance.