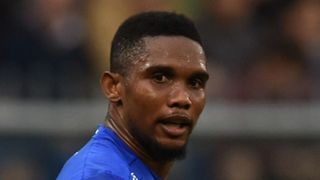 The battle for the Iron Throne is nearing its conclusion but, if you believe Konyaspor, it is Samuel Eto'o - and not Cersei Lannister - who is the rightful ruler of the seven kingdoms.

Eto'o joined the Turkish Super Lig side on Wednesday and the club marked the deal with a Game of Thrones-inspired Twitter video.

Using the famous theme music from the show, the video mimics the Game of Thrones intro in which a map moves from kingdom to kingdom, instead charting the nomadic career of Eto'o, which has seen him play for Real Madrid, Barcelona, Inter and Chelsea among others.

Former clubs Mallorca, Anzhi Makhachkala, Sampdoria and Antalyaspor are conspicuous by their absence from the video, which ends with a beaming Eto'o atop the Iron Throne.

Cersei and Daenerys Targaryen may have something to say about that...