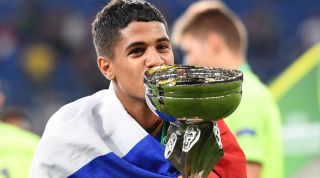 Last summer, Manchester United made Anthony Martial the world's most expensive teenager when they signed him for £36m (and that fee could rise further). Here's who could follow him...

This tall and powerful centre-back broke into Toulouse's first team last season and is now an automatic starter in Pascal Dupraz’s exciting young side.

Better on the ball than you might imagine for a player of his height (6ft 4in), Diop also poses a threat at attacking set-pieces thanks to good ability in the air. A member of France’s European U19 Championship-winning side in July, he has since been promoted to France's U21 squad ahead of his age, and previously attracted rumours of interest from both Manchester City and Leicester.

Mbappe and PSG striker Jean-Kevin Augustin (who misses out on this list as he is likely to manage only limited appearances for PSG this season) were not only the stars of France’s U19 European Championship-winning side over the summer, but the entire tournament.

The 17-year-old's leggy style and ability to cut in devastatingly from the left wing on his stronger right foot have drawn comparisons with Thierry Henry and Anthony Martial, two similar graduates from Monaco’s outstanding academy. At this stage it's a case of who isn't interested in signing him early: Manchester City allegedly failed with a move, while Liverpool and Barcelona have been linked too (among several others).

Technically excellent and difficult for defenders to catch with and without the ball, he has nailed down the right-wing position in Bordeaux’s 4-4-2 and will be difficult to oust from the team. There is a long tradition of Brazilians shining in Bordeaux colours, so Malcom is in a good place to develop into a top-class talent.

Picked up from Caen's youth academy, Diakhaby was barely known even by youth scouts across France when the 2016/17 season kicked off. But Rennes coach Christian Gourcuff saw something he liked in the striker during the opening weeks of the campaign, and Diakhaby has rewarded the manager’s faith by scoring a couple of crucial goals off the bench in the first two months of the season.

Tall and lithe, he is difficult to mark and looks a natural finisher. Expect more from this surprise package of a player in Brittany.

Answers on a postcard if you can work out what Guingamp teenager Blas’s best position is. Able to operate as a No.6, No.8 or No.10, the 18-year-old starred for France's U19s as a winger over the summer and looks genuinely comfortable in all positions he has played in for club and country.

Blessed with great balance, a smart footballing brain and sharp awareness of team-mates’ positions, he is Guingamp’s most promising youth graduate and the club are already talking about him being a €20 million player in a couple of years’ time if he continues to develop at the same rate. In August, Lyon, Liverpool and Inter were all said to be watching him closely.

Part of the reason PSG were willing to sell David Luiz to Chelsea over the summer was that they had Presnel Kimpembe waiting in the wings. The left-footed centre-back – who also interested the Blues according to reports – is competing against Marquinhos for the second centre-back spot alongside Thiago Silva, and holding his own against those illustrious Brazilians.

Kimpembe has impressed so much since the start of the season that he won a call-up for France’s internationals against Holland and Bulgaria this month after Eliaquim Mangala pulled out through injury.

Highly regarded since his early teens, Cornet joined Lyon from first club Metz 18 months ago and has been a fantastic addition to one of Europe’s most exciting young sides. He broke into the first team during the second half of last season and was a tremendous foil for leading scorer Alexandre Lacazette, a player he may eventually eclipse.

Already a regular for France’s U21s, Cornet stands a good chance of following fellow wonderkids Kingsley Coman and Ousmane Dembele into the senior France set-up at some point this season.

The 21-year-old Cyprien already has more than 100 league appearances to his name after excelling for Lens from a young age. His stellar performances in north-east France earned him a €2 million move to Nice over the summer, and under new Nice manager Lucien Favre he has made an outstanding start to 2016/17.

His box-to-box style has wowed fans on the south coast and underlined exactly why he was nicknamed ‘three lungs’ by sections of Lens' fanbase. Powerful and muscular, he has all the attributes to be a big hit in the Premier League a couple of years down the line.

The ponytailed striker is spending a year on loan at Corsican club Bastia from Bordeaux and will benefit hugely from getting a run of games. Strong, powerful and a willing worker across the frontline, he is a useful focal point in attack and looks capable of scoring 10-15 goals this season.

He has earned international honours, shadowing Utrecht striker Sebastien Haller for France's U21 side. He could be the difference between Bastia staying up and being relegated this season.

Harit impressed when France were crowned European U19 champions over the summer and did so well at Nantes in pre-season that manager Rene Girard was left with little option but to promote him into the first team. Quick-thinking and fleet-footed, he glides between the lines and has great ability to drive forward in possession, forcing defenders into decisions.

There are rumours that Bayern Munich and Atletico Madrid are tracking a player billed as Nantes’ most exciting prospect in years.