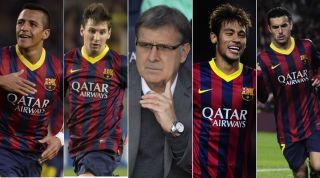 For far too long, Barcelona have relied heavily, if understandably, upon the magic produced by their Argentine wizard; without him, El Blaugrana have looked all too mortal, and the mess that was Messi’s injury was expected to provide a stern test for coach 'Tata' Martino.

However, in the Flea's absence Barça’s other attackers have stepped up to the task at hand, providing Martino with a pleasant problem as Messi returns from the sidelines. And Tata's decisions in their latest La Liga win shows how far Martino has come in weaning the club off their dependence.

For the 4-0 win over Elche, Martino opted to leave the club’s big summer buy Neymar on the bench. As a result, Alexis Sanchez, Pedro and Cesc Fabregas were all handed starts – and the trio were far from shambolic.

Alexis, who featured on the right flank, bagged his first hat-trick for the Catalan club, including a brilliantly taken free-kick – a far cry from his underwhelming two previous seasons. Pedro, also in fine form recently, set up a goal for the Chilean and scoring Barça’s second goal. Fabregas too was inspired, setting up Pedro's goal before winning a penalty.

The win keeps Barcelona above Atletico Madrid on goal difference. And things are about to get a whole lot better.

Having barely missed a beat, Messi marked his return from injury last week with an open training session in front of a packed Minie Estadi and wowed supporters by scoring a hat-trick. And with his return to the starting XI a certainty, which star will Martino drop to the bench in order to make way for the Argentine?

Since a slow start to the season where he was restricted to substitute appearances, Pedro has finally rediscovered the form that made him one of the team’s most coveted yet underrated attackers. The 26-year-old has scored 11 in 17 league appearances this season and added 4 assists.

Alexis has also bagged 11 times in just 14 appearances, one being the memorable chip which sealed Barça's latest El Clasico win. And the Chilean credits his good run of form to Martino: “Tata has given me the confidence a player needs."

Despite warming the bench over the weekend, Neymar too has enjoyed a productive start to life at Barcelona, scoring 6 and setting up another 7 goals in 15 appearances.

It all gives Martino food for thought ahead of this weekend's top-of-the-table clash against Atletico at the Vicente Calderon. Asked at the weekend whether or not he knew who would feature, Martino remained coy: “In truth I don't even know what the XI will be on Wednesday [against Getafe in the Copa del Rey]. I think he [Messi] is mentally ready to play against Atletico, but we won't pick anyone if they're not fully recovered. If he doesn't feel right, he won't play."

By Tuesday, the return looked more imminent, with Martino naming Messi in his 18-man squad for the Getafe game. "Leo feels good," said the coach. "He has been training well, and he's ready to play now. I'll decide tomorrow if Messi starts the game or not."

Whenever it comes, Messi’s return means that Fabregas will be pushed back into his usual playmaker role, with one of the attacking trio – Neymar, Pedro and Alexis – missing out. And despite the competition for places, Martino remains adamant that the Argentine’s return would only serve the purpose of helping the team. "The return of the best player in the world will not overshadow the others," he said. "On the contrary, with Leo we'll be even better."

As it stands, Alexis and Pedro are the favourites to miss out on a spot. Whatever unfolds, Martino can rest easy that he has the ability of calling up any one of his inspired forwards. "The sensations are good, we are in form and our best moment is yet to come."