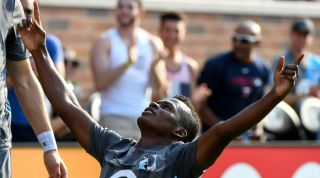 The 30-year-old dazzled for Minnesota in their dramatic 4-3 win over Toronto at the TCF Bank Stadium on Wednesday night.

His delightful trivela strike in the eighth minute got MUFC off to a fast start, which he followed up by grabbing the hosts' third and fourth goals in five second-half minutes. Even his second goal was excellent; another glorious dink over Toronto goalkeeper Clinton Irwin.

Quintero's hat-trick goal in the 58th minute was the best of the lot, though, as he audaciously chipped in from outside the box and into the top corner.

(We hope the commentator had a nice lie down after this.)

After the game, Quintero – who traded Club America for Minnesota at the start of the season – said he noticed a weakness in goalkeeper Irwin's game that he was keen to exploit.

"I noticed from the beginning that [Irwin] took two steps forward to anticipate plays," he told MLSsoccer.com.

"In some games it works, in others it doesn’t. Today, all of them went in."

Quintero now leads Minnesota's scoring charts with six goals, as he continues to impress in his debut season.