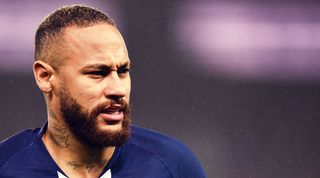 Neymar is everywhere in the final third - linking play, showboating and creating for his fellow stars. Curiously though, you can set your calendar by when the world’s most expensive footballer will be noticeably absent for Paris Saint-Germain.

This weekend, the French champions were involved in a seven-goal thriller, seeing off west coasters Bordeaux 4-3, with a Marquinhos double sandwiched between strikes from Edinson Cavani and Kylian Mbappe.

The board went up for stoppage time following the 90, and as if by autocue, Brazilian playmaker Neymar clattered into midfield starlet Yacine Adli for his second yellow of the match. Referee Willy Delajod dismissed Neymar, the no.10 lifting his arms in protest as he sat on the grass following his challenge.

Neymar is now suspended for PSG’s next match - which coincides with carnival season in his native Brazil. Coincidence? Well, this isn’t the first time that Neymar has seemingly conscientiously objected from professional commitments...

2015 was a vintage year for Barcelona. They lifted the treble and Neymar was building a reputation as the best footballer on Earth not named Lionel or Cristiano. He rounded off a superb season with the final goal in the Champions League final against Juventus and the fabled MSN dynamic was becoming one of the most feared frontlines in footballing history.

Cules perhaps didn’t realise at the time that the Brazilian was laying the groundwork for a very different kind of reputation, too. Neymar missed a 6-1 victory over Rayo Vallecano on March 8 because of a suspension picked up when he accumulated five bookings. It seemed innocuous enough at the time.

As he was on La Liga’s naughty step, Barca allowed the star to head home to Brazil - and see his sister, Rafaella Santos, on her birthday on March 11 - starting a pattern for what was to come.

Neymar’s fifth yellow card of the 2015-16 season again meant that he missed a clash during the same week of the season. The forward missed the game against Eibar on March 6, and again, returned to South America to see Rafaella in time for her birthday.

Some fans grumbled, accusing him of deliberately picking up that key booking. This was the first time that concerns were audibly raised over whether Neymar was clearing his diary during March.

Lionel Messi dropped a bit of a stinker, but Neymar was on hand to help Barcelona to a famous 6-1 hammering to overcome future employers PSG in the Champions League. The Brazilian had managed to avoid his now-customary suspension in the league, but didn’t make the squad against Deportivo La Coruna, as he’d picked up an “adductor issue”.

Whilst he may have thought his heroics in Europe would buy him some sympathy from fans though, he was wrong. Barca were beaten by Deportivo in his absence and Juventus got their own back in the Champions League, beating the Neymar-less side out of the Champions League.

In his time out, Neymar sought to recover from the injury at home in Brazil. With his sister, Rafaella. During her birthday.

Following a £200 million move to France, Neymar was in electric form, setting Ligue 1 alight with many questioning whether this was the year that Paris Saint-Germain finally realised their megabucks-funded destiny. Yet it all came crashing down for them in Europe - again - as their talismanic No.10 suffered more bad luck.

In the first leg of the Champions League knockout tie against Real Madrid, Neymar was floored and taken off. The diagnosis turned out to be a broken metatarsal and sprained ankle, ruling him out for a few weeks. Without their record signing, PSG were disposed of with ease by Real, who went on to lift the title for a third season in a row.

How did Neymar recover from his injury, where and who with? We’ll leave that with you to guess.

January 2019: revenge of the metatarsal flare-up

In January 2019, Neymar left the field against Strasbourg in a French Cup match, with boss Thomas Tuchel claiming how worried the Brazilian was about the return of the problem. “If you play like that don’t complain if you take some knocks after,” Strasbourg midfielder Anthony Goncalves said with less sympathy. “If he wants to have fun, we’ll respond with the weapons we have. We’re not here for a laugh.”

After being drawn with Manchester United, who were firmly in transition under Ole Gunnar Solskjaer, there was at least optimism from some that Neymar wouldn’t be missed too badly - especially as they won 3-1 at Old Trafford in the first leg. So confident, was Neymar, that he brazenly battled on at his birthday bash in a bright crimson blazer and matching crutches, despite how it would look would his side crash out of Europe again in his absence.

PSG lost 2-0 at home, with United progressing on away goals.

It’s February 1 and PSG are midway through a routine demolition of wide-eyed Ligue 1 minnows, this time Montpellier. Neymar is given a yellow card and proceeds to go apoplectic over the incident. For the rest of the match, it looks as if the Brazilian has a thorn in his paw, flying into tackles and obviously sulking on the field.

Three days later, Neymar is absent. PSG confirm that it as a blow to the ribs that’s ruled the star out of the league clash against Nantes, the day before he turns 28 years old. Neymar’s birthday party – an all-star affair with an all-white dress code – was apparently 48 hours earlier, with boss Thomas Tuchel diplomatically stating it is not “the best way to prepare for a match”, after a selection of his team are pictured at the do.

The internet was rife with suspicion over Neymar’s behaviour, following his yellow card against Montpellier. Was he trying to get sent off? Regardless, he had a sicknote anyway against Nantes.

February 2020: Another party, another viral video

So here we are - PSG are facing another tough tie in the Champions League last 16, having lost to Dortmund away in the first leg. The match against Bordeaux has sidelined Neymar for at least some of March - again - but the controversy doesn’t end there.

On the Thursday following the European loss, Neymar was one of several PSG players pictured at a party celebrating the birthdays of Cavani, Angel Di Maria, and on-loan Mauro Icardi. The club had apparently asked for a more discreet party season this year, but Tuchel was forced to comment on the videos of the do, which went viral.

“We are not happy with this party image,” said the German. “I was very surprised.”