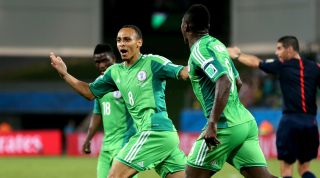 The general consensus prior to this summer's World Cup was that tournament debutants Bosnia and Herzegovina would make it through to at least the last 16. Yet Saturday's defeat to Nigeria (the Super Eagles' first World Cup win since 1998) means Emir Spahić's side will be heading home at the end of the group stage.

This Nigeria team doesn't look as strong on paper as some of their previous vintages, but they were well organised defensively and persistent in their pressing and pressuring further up the pitch.

A key aspect of the game was how forward Emenike bullied Bosnia left-back Senad Lulic. The burly Fenerbahce star ran aggressively at the Lazio full-back with great success, and it was clear he was coming wide to Nigeria's right flank in order to target him.

When Lulic was substituted on 57 minutes, Emenike had for less success with his take-ons, and also tried to beat players in other areas of the pitch. He completed 5 of 6 take-ons on the right with Lulic on the pitch, but only 3 of 6 once the defender had gone off.

This battle was also an element of the game's only goal. Emenike drifted to the right, ran at (and, to be honest, into) Lulic, powered past him and tucked the ball back for Stoke striker Peter Odemwingie to stroke past Potters team-mate Asmir Begovic in the Bosnia goal.

Knowing a defeat would knock them out, Bosnia looked to up the tempo, with the brilliant Miralem Pjanic their obvious game-changer. The Roma star showed exactly why he is now regarded as one of the finest playmakers in Europe by displaying both dizzying dribbling and inch-perfect distribution of the ball. He succeeded with 7 of his 8 take-ons, and created no fewer than 7 goalscoring chances for team-mates.

Unfortunately for Pjanic and Bosnia, striker Edin Dzeko didn't enjoy a particularly good day at the office. The Manchester City striker was incorrectly denied an opening goal by the linesman, who wrongly ruled the forward was offside when receiving a Pjanic pass before rifling the ball into the net at 0-0. He then proceeded to spurn a host of chances, including a 90th-minute header nodded tamely into Nigeria keeper Vincent Enyeama's waiting arms, and a scuffed injury-time shot into the Lille keeper's legs.

Nigeria now know they'll be through to the knockout stages should Iran fail to beat Bosnia in the final round of Group F matches on Wednesday, regardless of the outcome of their own match against Argentina.