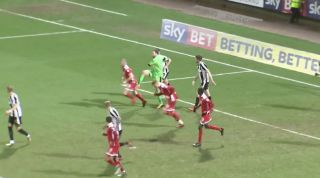 Fitzsimons didn't seem to be in a great mood during County's League Two clash with Harry Kewell's Crawley on Tuesday night.

After catching a corner in added time with the score at 1-1, he cynically struck Smith in the back of the leg before hoofing the ball upfield.

Of course, everybody noticed what Fitzsimons had done – including the referee. The former Crystal Palace goalkeeper was shown a straight red card and Crawley were awarded a penalty which Josh Payne slotted home in the 95th minute.

Following the 2-1 loss, Notts County boss Kevin Nolan focused more on the decision to award Crawley a corner in the build-up to Fitzsimons's brainfart.

"It's a goal-kick and not a corner," Nolan told the Nottingham Post post-match.

"But, listen, I am not going to try to look after Ross Fitzsimons in this because we all take accountability for our own actions.

"It has cost us a point, but if it's a goal-kick then it doesn't happen."