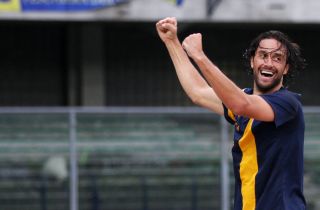 Italy loves its old relics, and in footballing terms none come craggier and more charming than Luca Toni.

Now 36 and at his eighth Serie A club, the beanpole veteran produced the shock of the opening round of Serie A. His brace of headed goals saw Hellas Verona down AC Milan 2-1 in front a packed Benegodi stadium.

The return of the Veronese outfit to the top flight after an eleven-year absence was, according to the Italian press, notable for the potential for complete and utter mayhem and the meltdown of modern society, with the home support set to rein down a torrent of racist abuse towards Mario Balotelli.

However, Super Mario was the forgotten man of the evening, as the home fans instead got behind their own side. They rose as one to applaud the old warhorse Toni when he was substituted late on, having battered the visiting defence to a pulp.

Ever gracious in defeat, Massimiliano Allegri called Toni a “Lion” who had “fought for his team”, while at the same time berating his own youngsters, who looked like they would’ve preferred to have been on the beach enjoying the late summer sun than helping their team get off to a winning start.

Balotelli was the pick of a very lethargic-looking attack, with Stephan El Shaarawy and M’Baye Niang giving off the attitude of teenagers who had just dragged themselves out of bed – their spiky hairstyles only accentuated that tousled feeling of sleepiness.

The same could not be said for dear old Luca, whose flowing mane has not changed since he made his debut for Modena back in 1994. Little has changed in his style of play either, which consists mainly of throwing himself in the general direction of the ball. Yet his gangly frame and less-than-sure control is offset by a never-say-die attitude and using his head not only for nodding the ball into the net.

That’s why he is still playing – and scoring – well into his 30s. Although the last few years have been lean for the 2006 World Cup winner, the years and the frustrations tumbled away when he arrived unmarked to head in Verona’s equaliser. There was even a look of the wide-eyed youngster about him as he ran off to celebrate.

Andrea Mandorlini’s side played some of the most exciting football in Serie B last season and managed automatic promotion behind champions Sassuolo. The coach knew he needed some old heads to guide youngsters like Jorginho - a genuine star in the making.

Not only did the coach bring in Toni for one last swansong, but he also signed Massimo Donati, who after a promising early career and a spell in Scotland with Celtic had settled into the role of midfield fire-fighter at a succession of struggling clubs.

It was their cool heads that ensured their team-mates did not crumble after Milan took an early lead. When the equaliser came, those first-day nerves evaporated and Verona were walking on air. The impressive Martinho was a constant threat down the left flank, while the more experienced Rumolo and Bosko Jankovic dovetailed neatly on the opposite wing.

However, it was the old man in the middle who had Milan defenders Cristian Zapata and Philippe Mexes all at sea. In short, it was “hellas” for Milan, and long after the final whistle Balotelli was still slumped out on the pitch, well aware of how far desire and determination can take you a long way in football.

Milan stumbled on the opening day last season when they lost to newly-promoted Sampdoria, the prelude to a poor run that almost cost Allegri his job. The coach’s future has once again been put in doubt and only qualification against PSV Eindhoven in the Champions League on Wednesday will stop Silvio Berlusconi baying for blood.

From the Lion of Verona to the Mule of Turin – that being the moniker Carlos Tevez has been handed by Giorgio Chiellini. The Juventus defender was beside himself in his fulsome praise of the summer signing, who scored the only goal in the champions’ victory at Sampdoria.

“He is a classy player but what surprised me was how much he sacrificed himself for the team. He worked like a mule,” gushed the usually hard-to-please defender.

The display had the usual Antonio Conte stamp on it, and while for long periods the team played at a steady tempo, when they did step up the pace the chances came at regular intervals. The goal was a well-worked one-touch move between Arturo Vidal, the ever-improving and Paul Pogba and finally the non-stop Tevez, who was on hand to tap home from close range.

There had been a deluge of rain throughout the match, but when Juve took the lead they were home and dry. They were helped when Sampdoria had a goal correctly disallowed for offside and were then reduced to ten men in the last minute when Paolo Castellini was red carded a mere eight minutes after arriving on the pitch.

Off to a winning start and with Milan already on one knee, Conte could sit back, relax and let the rest of the league get their campaigns underway.