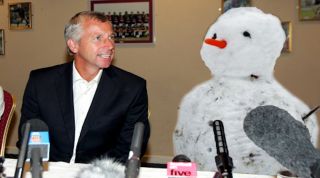 Newcastle United have been forced to concede that January signing Mathieu Debuchy was in fact an expertly crafted snow right-back.

The admission came after another rough weekend for Newcastle, who were beaten 2-1 by fellow strugglers Reading.

Things went from bad to worse for Alan Pardew this morning, with the revelation that £5m winter signing Debuchy is in fact composed of hand-packed snow, casting doubts about his long-term future at St James' Park.

"We had been targeting Mathieu for months. Playing for Lille, he stood out with his pace, vision and jolly demeanour," Pardew told FourFourTwo.
"And unlike other players we were watching, he evoked a childlike sense of wonder and magic."

Pardew was reportedly fuming when Debuchy failed to attend training on Monday before his attention was directed to a small slushy puddle with a carrot, two lumps of coal and a pair of Adizero boots floating in it.

"For want of a better phrase, the boy's quite literally melted. To be fair to Lille, they're as disappointed as we are about the mix-up," Pardew explained.
"They sent us a fax on Monday afternoon to discuss reimbursement. Sadly it turns out our fax machine was also made of snow."

Debuchy, who left the training ground in a bucket, is now a serious doubt for Newcastle's crucial trip to Aston Villa but may still be favoured over James Perch.

Scottish giants Celtic will be sympathetic to Newcastle's plight. The Bhoys' attempts to add some festive cheer to the window of the Celtic Park club shop in 2006 led to the accidental signing of Dutch defensive midfielder Evander Sno.