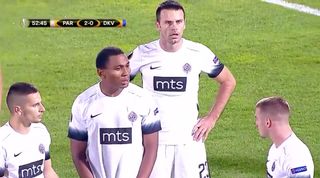 Partizan were 2-0 up over Dynamo Kiev at half-time in Thurday night's Europa League action through goals from Ozegovic and Leandre Kana.

But Ozegovic spoiled things for his team by bizarrely deciding to raise his arm inside the area for a Dynamo Kiev free-kick on the edge of the box. The ball hit it; the referee awarded a penalty.

Junior Moraes converted the penalty, but things got much worse for Partizan. That penalty kick-started a phenomenal comeback for Dynamo Kiev, as Vitaliy Buyalskyy equalised in the 68th minute before Moraes grabbed his second – and the winning goal – just six minutes from time.

When your teammate gives away an absolutely needless penalty...The looks the three of them give him September 29, 2017

In Other News... on FourFourTwo.com​