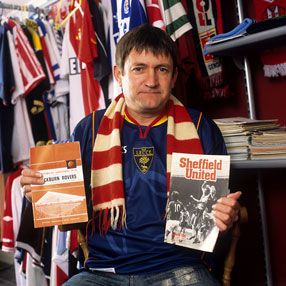 Not all musicians are football fans of convenience. Some, like The Beautiful South (and former Housemartins) lead singer Paul Heaton, understand the various subtleties of following a team home and away, the nuances of terrace culture.

“What the f**k was Robbie Williams doing at the FA Cup semi-final last season?” questions Heaton. “He didn’t support Newcastle or Man United – he was taking somebody else’s ticket. Most musicians pick a side who are doing well and I find that strange and shallow.”

Heaton’s unconditional support for Sheffield United cuts deep. It commenced soon after he moved to Sheffield from The Wirral when he was four. “My two brothers are Sheffield Wednesday fans and my dad took us there but I always wanted to watch United,” he remembers. “My first match was in 1969 and we beat Villa 5-0. They let me in for free, unlike at Swillsborough. I told all my friends to go to the next game, but we lost 1-0 to Bolton. That gave me an early sign of what it meant to be a Sheffield United supporter. You don’t build them up because there is something dangerous about it.”

Heaton moved to Surrey at 14. “I went to games by myself,” he says. “It was an isolated existence and not many people spoke to me. I also sometimes went with a friend called Joe Sweetinburgh. We stood out in half-full away ends because I dressed like a tramp and he was black. We were known as the ‘Cockney Blades’ to some.”

Looking for a change of scene, Heaton moved to Hull in 1981. “I wanted to move somewhere I hadn’t been before and my mate wanted to be near the coast so we chose Hull. I lived on the same street for 15 years, played for the same Sunday football team for 17, the same Saturday team for 10. The Sunday team retired my number five shirt when I left to live in Manchester.”

Alone, Heaton travelled home and away following the Blades, using National Express buses. “I went to some really risky places like Millwall. I had a northern accent but I never felt scared. I actually found the hooliganism fascinating.”

He formed The Housemartins in 1983 and regardless of his high profile, continued attending games. “There was no special treatment,” he says, “the only difference was that if I went on a coach with people who were likely to cause trouble I’d hang back a bit. People sneer, but these lads are the people who will stick with a team through thick and thin. Hanging around with different people from football has kept me on a steady path. I still sit with the people I’ve always sat with in the main stand, H block. It’s closed due to crowd trouble at the moment.”

The word ‘Wednesday’ brings a less considered reaction. “I can’t even bear to look at the Wednesday end when we play them,” he stresses. “They look like such a bunch of wankers. United and Wednesday are probably equally popular in the city of Sheffield, but their catchment area is bigger, their fans are more Yorkshire with a capital Y, a bit more brash.” Heaton has no desire to see his team promoted. “The ambition to get in the Premiership is a false one. I have no problem with us staying where we are. I would like the players to be rewarded for their effort, but there would be a fear of losing in the Premiership, a fear of being ferried around by police and not being able to have a drink. Premiership fans are more arrogant too. I liked it when we were in the Third and Fourth Division. There was more of a bond between players and fans.”

Manager Neil Warnock wins approval. “I’m fond of him. He’s a stubborn man and that can come over as arrogance, but he’s trying to protect his players and the club. He’s a Blade and a fan – there’s a difference. He’d manage us whatever division we’re in, whereas not every fan would watch us.”

Heaton’s football obsession goes beyond Bramall Lane. He collects replica shirts, stickers, scarves, programmes and badges for his football room in Hull. He also pens hand-written boo�ks on foreign teams. The room we’re sitting in is like a club shop, with replica shirts from Valladolid to Verona, but there are no retro shirts.

“Retro replica shirts are an excuse for middle-class fans that got into football after Italia 90,” he opines. “Mind you, I do find it strange for grown men to go to the match wearing replica shirts, but it’s the culture – I remember wearing shin pads and boots to a match when I was eight.”

Heaton is a fan of European football too. “I used to follow Inter and travelled to Italy by myself on the train – it takes about 40 hours. Inter felt like the underdogs, but now if I watch an Italian team it will be a smaller side. I always look out for Lecce’s results. They were the first side I saw in Italy, against Milan. They were unbelievably defensive, with two or three men on Marco van Basten. The San Siro booed Lecce throughout but I thought they were brave.

“I watched two games in the Ukraine recently, one involving a team of airport workers. We fell in with some dodgy skinhead Dinamo Kyiv fans who wanted to take us around. They got the wrong end of the stick with British fans. They wore hooligan gear but had the politics of the late-’60s and early-’70s. They were racist – if anyone was racist at Sheff United they’d get a slap.”

From Heaton’s mates, no doubt...

Best moment
“When Cooperman, a famous Sheffield United fan, ran on the pitch at York and wrapped a 50-yard scarf around Tony Kenworthy. He ended up looking like a mummy. A pitch invasion at Crewe was special too. It was so beautifully spontaneous, as though life meant something, and nothing to do with trouble.”

Worst moment
“Walsall at home, the last game of 1980-81. We needed a draw to stay up. County got a penalty in the last minute and scored. Then we got a penalty, which would have kept us in the Third Division, but Don Givens missed. I smashed up my radio and cried my eyes out.”

All-time hero
“Geoff Salmons. He wore eight and had the style of another Blades’ hero, Tony Currie. I’ve never really spoken to these people. I said hello to Tony Currie once and felt that was enough. I’ve got nothing to say to my idols.”

All-time villain
“Terry Curran, played for Sheffield Wednesday then later joined us. We lost 4-0 to them one Boxing Day and he destroyed us. We were top of the league but our season fell apart after that.”

Most detested team?
“I make tables every five seasons of who I hate the most – Premiership, La Liga and Serie A – just to see if I’ve been influenced by television propaganda. Leeds United are top and I don’t like Liverpool. I really hate sides who come up from the Conference and go back down too. Just when you’ve learnt their kit and what their ground looks like they get relegated.”