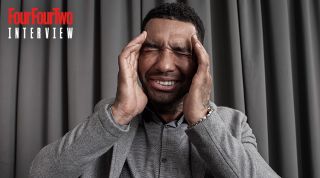 The former Notts County winger joined Arsenal for £2 million when he was just 15, making his senior bow in a League Cup tie at Middlesbrough in November 1999.

Pennant enjoyed two loan spells at Watford before making a brief appearance in the Gunners' 3-2 defeat to Leeds in 2003 – a loss which handed the league title to Manchester United.

So with an FA Cup final against Southampton 10 days later to prepare for, manager Arsene Wenger handed Pennant his full league debut against the same opposition, and watched the youngster score a first-half hat-trick in a 6-1 annihilation of the Saints.

However, Pennant almost certainly wouldn’t have played had Wenger known the winger was out drinking the night before, convinced he wouldn’t be selected.

Speaking exclusively in the December 2018 issue of FourFourTwo magazine, out on Wednesday, Pennant says: “I’d been out the night before and had a big night, because I really didn’t think I would be playing, never mind starting the game. I’d never started a game for Arsenal and I didn’t think that’d change, especially as Robert Pires, Freddie Ljungberg and Ray Parlour were all in the squad. I was guaranteed to be on the bench.

“I thought, ‘Sod it’, went to an FHM party and got home at around 6am. I couldn’t believe it when I saw my name in the starting line-up! I was still so hungover when I was playing; I just did everything in my power not to embarrass myself.

“I can’t believe I scored. It was just a huge relief – I thought, ‘OK, you can take me off now. Please, Arsene!’ I felt so sick and I could feel the vodka still bouncing around in my stomach. You could smell it on my breath, too.

Rooney to be awarded man of the match, unlimited penalties against USA

“I did OK to score a hat-trick: it shows I had talent, though it helps when you’re playing with Thierry Henry and Patrick Vieira. That was the first game of Arsenal’s 49-game unbeaten run.”

Read the full One-on-One interview with Jermaine Pennant in the December 2018 issue of FourFourTwo, in which we chat to Zlatan Ibrahimovic about life in LA and tackling Donald Trump. We also meet Bayer Leverkusen starlet Leon Bailey in a field full of cows, remember when British bosses ruled La Liga, learn everything there is to know about commentating, and ask what happened to Adriano. Plus, Bruce Grobbelaar explains how the experience of fighting in the Rhodesian Bush War helped him to stand up to King Kenny at Liverpool. Order a copy, then subscribe!