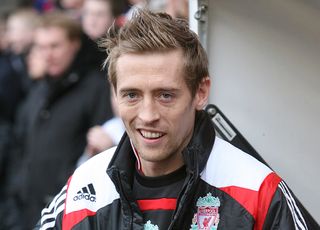 Alright Peter. What’s the weirdest dream you’ve ever had?
About three years ago I used to dream about being a dwarf. I was walking round a bar and I couldn’t see anything, and nobody could see me. It was completely surreal.

A psychologist would have a field day with that…
They would. It was about three years ago and a lot was being made of my height at the time. I guess something in my brain clicked and went the other way in the dream. It was a totally different perspective, I can tell you. I’d wake up relieved to be tall, and thankful for what God gave me.

You’re a religious man then? Ever turned to the bible for solace?
I’ve read extracts, yeah, although I couldn’t tell you which bits. I’m not too religious, although I’d say I do believe in God.

What was the best thing you made in woodwork at school?
I was awful at woodwork. Artistic stuff was never my forte. I guess the best thing I made was a wooden pencil case thing. It was a box with a sliding mechanism. It was also hinged, so you could flip it open. I should have patented that.

Did you ever get grounded as a kid?
Yeah. I remember playing football once in my back garden. The ball had gone into my neighbour’s garden about 14 times and they finally got fed up and wouldn’t chuck it back. So we started lobbing mud onto their window. My dad found out and wasn’t pleased.

Did he thrash you mercilessly?
No. To be honest, I think he thought it was quite funny. But he had to be seen to be issuing punishment, so I got grounded.

What’s your favourite swimming stroke?
Got to be the front crawl. Breast stroke’s a bit ladylike, isn’t it? If I could do butterfly that would be my favourite, but it’s knackering. One length and it’sall over.

What superpower would you most like to possess?
X-ray vision is tempting, but I think I’d go for the power of flight. It’d just be so handy for getting about. And it would also be useful on the pitch. Although I’m not sure if they’d allow it, would they?

What’s your all-time favourite TV or film robot?
There aren’t any dancing robots are there really? I guess I’d go for the gold fella from Star Wars. C3PO. He was a decent robot.

If youw ere murdered, which fictional TV detective would you like to investigate the case?
Er… what’s his name with the brown Mac?

Colombo. Everyone goes for Colombo.
I used to watch him when I was a kid. My gran was bang in to Colombo. We loved it. He’d sort it out.

Why do you think wearing hats is no longer popular, Crouchy?
No idea, but I’ve never been a hat man. There are a few people trying to bring the hat back, aren’t there? Pete Docherty’s giving it a crack. But it doesn’t work for me. I’m glad they’re not compulsory.

Ever picked up anything off the floor and eaten it?
It’s the five-second rule, isn’t it? I’ll go along with that. In fact, I’d stretch it to ten seconds. Apart from in the case of face-down pizza. That’s a difficult situation.

What about Scotch eggs? Are you a fan of the mighty Segg?
I’m a huge fan. I’ve always got a box of Scotch eggs at home. Good quality ones, too. They’re in the fridge at home now.

Finally: is this interview a total waste of your time?
An utter, utter waste of time. But I’ve been talking about football all day, so I’ve quite enjoyed it, really.

From the February 2008 issue of FourFourTwo.