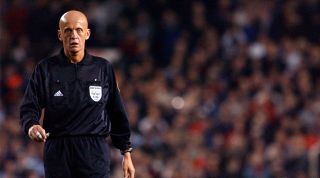 Long before the days of Mike Dean memes, another follicly challenged match official was busy revolutionising refereeing for the better. No, Manchester United fans, this isn’t an ode to Old Trafford penalty specialist Howard Webb, but rather a tribute to the world’s first celebrity referee: Pierluigi Collina.

A distinctive 6ft 2in presence, known for his bald head and piercing stare, Collina had the look of happy hardcore raver from one of those 90s nightclub promo videos on YouTube – but he was no joke. Few are naturals to the rigours of elite level officiating, but Collina defied convention with a combination of brains and brawn.

The Italian’s match preparations were meticulous. Graham Poll once recalled Collina’s pre-game presentation to his fellow match officials before one fixture at the 2002 World Cup.

"He drew their line-ups on a board," Poll said, "told us how they would play, who the fiery characters were, where the likely flashpoints would be, what each assistant might expect to happen on his part of the pitch.

"He covered everything. It was incredible… And, furthermore, he wasn't wrong."

The Italian understood the importance of communication too, learning multiple languages to better relay his orders to players – but he also knew that, on the pitch, actions often spoke louder than words.

Everyone from Edgar Davids to Duncan Ferguson tried to bend the Italian’s ear down the years but Collina feared no man. He confronted issues quite literally head on in a way that left players in no doubt as to who was in charge, fixing his steely gaze upon them at close quarters, before explaining his reasoning firmly and fairly.

"You must realise how players feel when the pressure is high,” Collina said. “Sometimes I understand.” In a sport where referees were often harangued by players, Collina’s approach was refreshingly forthright.

"I am a man of the rules," he said. "Probably a consequence of my strict upbringing."

Born in Bologna to a mother who was a teacher and a father who worked for the Italian Ministry of Defence, Collina was educated at a Catholic school run by nuns. His formative years were spent in the Italian military and at Bologna University where he studied a degree in economics and enrolled in a refereeing course at the age of 17.

A passionate football fan who started out playing as a centre half, Collina had the foresight to turn his intimidating physical presence on the pitch to effective use as a match official.

Rising up through Italy’s myriad lower divisions, the next 15 years saw Collina hone not only his craft but also his distinctive look, which came as the result of an extreme bout of alopecia suffered prior to his Serie A arrival in 1991.

5 things the Premier League should do to improve VAR

Italian football was at its peak then, and with analysis and discussion in demand, it was common to see refereeing performances dissected and critiqued by fans and pundits alike.

However, despite standing out in a physical sense among Italy's pool of elite-level match officials, Collina's fair and even-handed approach to the game made him absent from such criticism, and won him fans both on and off the pitch.

“You have to be accepted on the field of play,” Collina explained.  “Not because you are the referee, but because people trust you.”

The Italian wasn’t overly officious. He believed in letting the game flow and never made himself the centre of attention.

He was the sort of referee who had the wherewithal to resist booking a player for jumping into the crowd after scoring in an emotionally charged fixture. Collina was also one of only two officials in Italy to avoid any sanction following the 2005 Calciopoli match-fixing scandal, with infamous former Juventus president Luciano Moggi branding him “too objective”.

Placed on FIFA’s Referees List in 1995 after taking charge of just 43 Serie A matches, the next decade saw the Italian become synonymous with a hard-but-fair stance reminiscent of that one teacher you hated at school but now look back on with fondness.

In a sport where referees are all too often remembered for their mistakes rather than their triumphs, Collina was in a class of his own – try to think of a memorable Collina blunder and you are likely to draw a blank.

It helped that some of his best games came in games involving English teams. If any nation has a complex about biased or incorrect officiating, it’s England. Yet time and time again Collina came through with flying colours.

He refereed Manchester United’s 1999 Champions League final win over Bayern Munich and was the man in black for England’s famous 5-1 mauling of Germany in 2001.

The fact he officiated Brazil's victory over Germany in the 2002 World Cup final wasn’t lost on England fans either, or the unfortunate Oliver Kahn, who branded the Italian bad luck before the game.

Collina’s stellar showings brought him unrivalled celebrity status in refereeing circles. He starred in a string of television adverts, was the cover star of two editions of Pro Evolution Soccer and even released his own autobiography.

The fame would come at a price though. Collina’s refereeing career was cut short in 2005 after the Italian federation withdrew an offer of special dispensation that would see him referee beyond the mandatory retirement age of 45. The reasoning was frivolous to say the least: Collina had starred in an advert for Opel, who were sponsoring AC Milan at the time. A conflict of interests was cited. Collina nevertheless resigned telling reporters: “People must believe in a referee.”

Regardless of the decision, plenty still believe Collina was the best of the best.

Voted FIFA ‘Best Referee of the Year’ for six consecutive years between 1998 and 2003, he was inducted into Italian football’s Hall of Fame with his favourite player, David Beckham, one of many to describe him as “best referee in the world”.

Despite hanging up his boots long ago, Collina still serves as a refereeing consultant and told one FIFA interviewer: "I still dream about refereeing matches."

He’s not the only one.

OPINION Amazon Prime's Premier League fixtures could herald a new age of on demand football. So what will change?

QUIZ Can you name the 50 most recent Premier League managers?