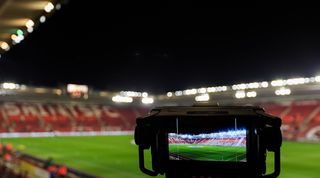 This will be an important week for the Premier League. On Tuesday, amid fears of insufficient bandwidth, Amazon will broadcast its first batch of fixtures. Realistically, Crystal Palace against Bournemouth is unlikely to test that capacity, but Manchester United against Tottenham could and the Merseyside derby probably will.

Amazon have paid £90m for the rights to 20 fixtures each season for the next three years. That’s certainly not the limit of Jeff Bezos’ financial reach and, most likely, it’s not the extent of his company’s ambitions in the market either.

HOW TO WATCH Amazon Prime Premier League matches for FREE

So this is a signposting moment. It’s also a path which has been lit by others. All the major American sports having been offering digital season passes for some time and the Premier League is actually very late to this party. Even just within the context of other European leagues, the notion of not having a free choice – or having to plot around a Saturday Blackout – is very quaint.

This has been an inevitable moment, then, given the Premier League’s need to keep pace with a culture with which 'on demand' is becoming increasingly embedded. People no longer wait weeks for new episodes, nor do they tolerate what they don’t want to watch. The result is that football broadcasting’s traditional format – in which television companies select games for the public – is both anomalous and outmoded.

Fans will recoil, arguing – quite fairly – that football has already sacrificed too much for the TV dollar. The game’s executives are hardly likely to care. They see top-level football more as entertainment than sport and its biggest clubs, too, make little secret of their desire to become Disney-like content providers.

But it’s worth considering what kind of long-term shift this could cause. Amazon has to be successful first, of course. It has to prove itself reliable, lag-free and trustworthy if it’s to attract its targeted numbers of subscribers.

On the assumption that it will be, what kind of effect will that have on the sport’s dynamics? If every top-flight game is eventually made available and fans are able to follow their club digitally, then it’s reasonable to wonder whether that will have an erosive impact on the various supporter behaviours which comprise the game’s bedrock.

It has, admittedly, been television’s game for some time and Sky Sports’ coverage is approaching its 30th anniversary. The concept of the Armchair Fan is hardly new, but this would be a further challenge. Firstly, because digitally streaming sounds the death knell for the Saturday Blackout and, secondly, because of ferociously expensive travel costs in the UK and a widening generational wealth gap.

Sacrifices have always been made by those who follow their sides home and away. The willingness to make that choice, however, probably depends – in part at least – on habits and routines developed at an early age. Those in their mid-30s and above can just about remember attending matches before the great hike in ticket prices took place. Crucially, they had parents and grandparents who could more comfortably afford season tickets and who, as a result, bred the habit of regular attendance.

Will the future generations have that same privilege? Possibly not. Demand for top-flight football in England remains very high, but the game extracts a far higher price from its public today and, at some clubs and for some supporters, going to a live match has become more of a treat than part of their routine.

It’s easy, then, to envisage this becoming an inadvertent moment of reckoning for the Premier League. Amazon’s entry into the market and the theoretical implications of their arrival represent the most dramatic change in supply the competition would ever have experienced.

And that would be happening at a time when supporters are already staggering under the weight of the financial burden imposed upon them. What encouraged their wilful denial in the past, what helped them pretend that they weren’t in an abusive relationship with their pastime, was the threat that if they didn’t attend games – if they didn’t cram on to over-booked trains or take nine-hour coach journeys – then they would be locked outside, forced to follow their team by radio, by Ceefax and, in the modern era, on the internet and social.

No, live and televised football are not the same. In fact, they’re dramatically different enough to almost be separate sports.  But viewed from a particular perspective, Amazon-style coverage could be seen as a tempting compensation for supporters who find themselves unwilling or unable to commit to their old routines. The distance between the sofa and stadium would remain the same, but it would be a far easier compromise to make.

The Premier League should fear that. What, after all, does football look like if the worst manifestations of that scenario transpire?

QUIZ Can you name the top 32 all-time English goalscorers in the Champions League?