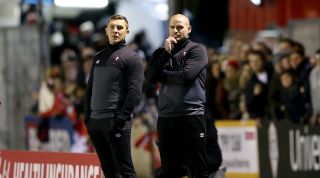 Johnson and Morley, who quickly shot to prominence in the BBC's documentary series about Salford's rise under Gary Neville & Co., have overseen three promotions during their four seasons in charge of the club - including a dramatic run to the FA Cup second round in 2015/16.

After failing to get promotion via the play-offs last season, Salford secured the National League North title this campaign with a game to spare.

However, despite the on-field success, Johnson and Morley have walked away due to "irreconcilable differences around personal terms relating to contract length and performance- related matters".

Gary Neville said in an official statement: "The last four seasons with the managers have been the most successful in the club's history and a huge part of that is down to Anthony and Bernard, so this announcement is regrettable.

"However, after a meeting this morning between myself, senior management and the managers it was clear there were differences between us that could not be resolved. It was therefore decided to part ways, and whilst this is disappointing, it is the right decision for all concerned."

Johnson and Morley said their goodbyes and Salford now begin the search for their successor.

Johnson said: "Although we are naturally disappointed, we felt the time was right. To go out on a high, after securing another promotion, makes us ready for the next challenge.

"Although that won't be with SCFC, we are already excited about where that challenge will be. We have had a great time at SCFC with a great set of players who have delivered what we asked, and as a manager that is all you want."

Morley added: "We have always given everything to SCFC and although we couldn’t come to an agreement on our future, we would like to thank the club for the opportunities they have given us.

"The fans have been exceptional and we will miss them, but want to wish the club every success in the National League."