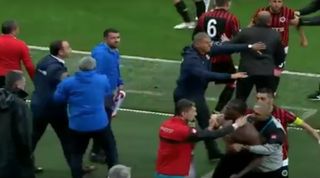 Pogba's side Genclerbirligi, who are in the relegation zone, were 1-0 down against Antalyaspor with five minutes of their Turkish Super Lig clash to play when the 27-year-old picked up an injury as he tried to clear the ball.

Genclerbirligi had used all three of their substitutes, but that didn't stop Pogba from walking off the pitch – meaning his side would have to finish the game with 10 men.

The defender's decision incensed team-mate Ahmet Oguz, who confronted Pogba on the touchline. That quickly evolved into a melee which ended with Pogba being pulled away from the scene.

Unconfirmed reports suggest the angry bust-up continued in the dressing room. After the game, Genclirbirligi coach Umit Ozat came to the defence of Pogba, who moved to Ankara in January after a six-year stint at Saint-Etienne.

"No one dare say a bad word about Pogba," Ozat said in his post-match press conference.

"What was he supposed to do? Wait for medics to arrive while laying on the ground in the 85th minute of a game?

"I'd rather judge him on the 85 minutes he played rather than the five he didn't. People should stop saying crazy things. Who would want to let his team down?"