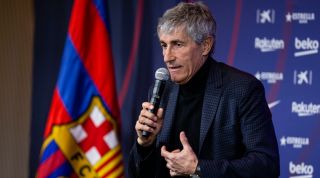 The two and a half years Ernesto Valverde spent as Barcelona’s head coach now seem like they lasted a decade. Had Valverde remained in charge at Camp Nou, he might well have won his third LaLiga title in a row at season's end. Realistic though that may have been, though, it doesn’t describe just how fractious this relationship has been or how much energy it ultimately sapped.

The headline catastrophes will outlive Valverde. That terrible night in Rome was succeeded, a year later, by a more harrowing nightmare on Merseyside. Valverde will keep his medals as part of the severance, but those twin disasters will be carved on his tomb.

Every angle of Origi’s winner vs Barcelona

But it’s a relief that it’s over. At their various peaks over the past decade or so, Barcelona were almost a gift to the game. To their supporters, of course, but also to anyone cruising the television channels late on a Saturday or Sunday night, searching for a game to take them in.

Barca were balm, a palate cleanse. No matter how your team did earlier in the day – win, lose or draw – you could let those pretty, Catalan patterns wash over and refresh you. Messi would do something. Or it would be Iniesta, Xavi, Neymar. Dani Alves, perhaps, or Luis Suarez. Most likely, it would be all of them in concert, dicing up some hapless opponent within the pillars of noise. The Camp Nou was the Colosseum.

Unfortunately, the slow slide away from that pinnacle has left a void. A void and the sound of endless dissatisfaction from the club’s supporters, echoing in the vacuum and compelling everyone to look away.

It’s easy to sneer - to throw around words like entitlement and to act incredulously. But fandom is relative and we all moan. About that system and this player, or whether our club's historic values are being properly respected. The complaints are always the same, it's the volume that changes. In this instance, the gnashing of teeth is only unbearably loud because Barcelona enraptured so many people in the first place.

Now Quique Setien, the former Real Betis head coach, has replaced Valverde. The club's first choice was Xavi Hernandez, but he rejected the offer - isn't that telling - to leave Barcelona in a terrible mess. It's good news, though. While Setien's Cruyffian beliefs make for some very easy PR and a few lines of neat copy - just enough to make his appointment seem like the plan all along -  his football has enough substance to promise something worth watching.

There’s a caveat, of course, and that’s that there’s no magic in a belief system alone. Barcelona are not as aligned as before. The club’s belief system hasn’t quite crumbled, but they’re less unique than they were and even the idea of La Masia, previously football’s fountain of eternal youth, is really not what it was. In fact, its coaching and footballing excellence, its identity, has been leaking out into Europe for years and installing Setien, whatever his virtues may be, really doesn’t untangle that ideological muddle.

But it’s a start and also an appointment that the world should be glad of. After all, before it went sour, Setien's time at Betis surely made most people wonder what he might be able to create on a grander scale.

During the 2017/18 season, some of their goals were little works of art. Sergio Leon’s header against Villarreal, for instance, which depended on that gorgeously well-cut crossfield ball from Junior Firpo. Or the late Antonio Sanabria winner in the Bernabeu, when Real Madrid were manoeuvred around expertly, then tilted off-balance and run-through by Antonio Barragan's perfect cross. Or the masterpiece against Sevilla, finished off by Riza Durmisi after a quick-slow-quick-slow move had gradually come to the boil.

Viewed one after the other, it’s remarkable how similar those passages – and many others from that season – seemed to be. Ironically, though, it’s actually their individual parts which make them comparable. The football Betis played that year seemed to depend on all sorts of decisions being made in perfect, one-after-the-other harmony. Players knew when to take one touch or to take two, when to pass or dribble, to drop a shoulder or lay the ball off.

That team performed in great harmony, but also with tremendous independence and autonomy. They were highly structured and clearly strictly coached, but the ball was that team's true hero and the players used it with great liberty. So sequences, symphonies - call those goals what you will – they remain delightfully intricate and infinitely watchable, even with the knowledge that Setien’s time at the club would come to the end just a season later.

The temptation, then, is watch all of those goals again, but while imagining the infusion of Barcelona’s talent and the garnish of their financial might. To factor in what they have now, but also who they might possess in the future. Frenkie de Jong in that position, Ousmane Dembele squaring up that defender. Leo Messi pivoting instead of Giovani Lo Celso, then Antoine Griezmann drifting into space.

It’s the promise of some kind of spectacle. Again.

QUIZ Can you name every team at Euro 96?