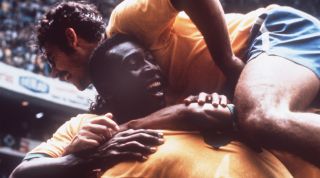 Even playing at three World Cups is a special feat, so imagine the kind of player who’s gone one better and scored in three tournaments. We’d call it ‘Roy of the Rovers stuff’, except Roy Race probably scored in about 10 World Cups (until he lost his left foot in a helicopter crash – although we hear the foot is back now).

Anyway, the good news on this quiz is that the players tend to be of the more modern variety. Nobody was scoring goals in the three World Cups back in the 1930s, because there were fewer teams, fewer games and international careers tended to be shorter.

We’ve given you seven minutes to try to name not just that great man but all 32 players to score at three or more World Cups. Tell us your total @FourFourTwo – we’ll retweet the best scores, if you don’t give answers away – and challenge some friends while you’re at it. Good luck!