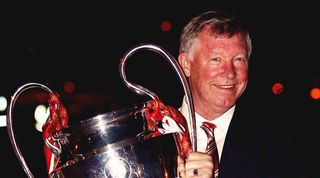 The new issue of FourFourTwo magazine will be in shops from April 29, and celebrates the 100 greatest managers of all time. So this week, we're giving you loads and loads of manager quizzes on the website this week. Let's hope you know your Herbert Chapmans from your Helenio Herreras....

Ten minutes on the clock, 30 managers to guess.

In 1955, UEFA planned a new tournament for the champions of each domestic league. The idea was of a European Cup: a way to determine the best side on the continent.

Nowadays, the Champions League is open to teams who don't even win their domestic league. It's had its sibling tournaments over the years, too - the UEFA Cup and Cup Winners' Cup being the two most famous - so getting your hands on a UEFA trophy is no longer reserved for managers of a select few sides.

So what was once an elite club of managers who had won a single trophy, is now a shortlist of the best bosses of all time.

Today, we'd like you to tell us who they were. When you add up triumphs across UEFA tournaments, who comes out on top?