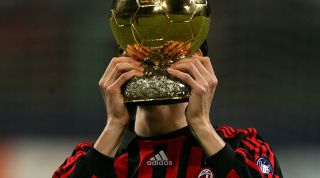 Eight minutes on the clock, 75 players to guess.

NOW TRY Quiz! Can you name the scorers in the last 20 Arsenal vs Liverpool games?

It's officially not on this year, but the Ballon d’Or has grown to become the most prestigious individual award in football.

Not bad for a gong that, before 1995, was just for the best European player and whose title – if we recall our French lessons – is the 'Balloon of Orbs'. Strange name for a football award, really, but still better than FIFA’s unimaginative ‘The Best’.

Anyway, since 1995 and the Ballon d’Or going all international, it’s become the de facto seal of approval for the world’s best footballer in the past year – so that's the period we're testing you on.

You should know most of these players - especially two names who have dominated of late...