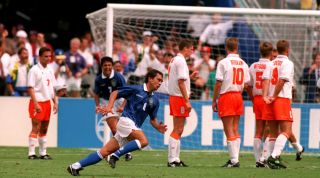 The unpronounceable Spanish midfielder had tongues twisting across the globe thanks to this cheeky effort.

Out on the right wing and with a wealth of crossing options at his disposal, Goikoetxea instead opted to swerve in an incredible cross-cum-shot which ended up nestling in the far left-hand corner of the German net. It was a genuine "Did he mean that?" moment – but he claims he did, and for that, we can only salute the man who wisely chose to shorten his surname to ‘Goiko’.

The Greeks witnessed some superb goals in the summer of 1994 – it was just a shame that they weren’t the ones scoring them. Nigeria’s gifted No.7 added to their woes here: after picking up the ball from just outside the area (with a terrible first touch, it must be said), he guided a pinpoint chip over Adonis Minou.

As if he hadn’t done enough to embarrass them, barmy Finidi then celebrated by crawling on all fours like a delighted puppy.

Now he's best known in England for waddling ineffectively around Leeds's midfield in the late-90s, but it’s easy to forget that at his peak Brolin was one of the best players in the world – and helped guide his nation to third place in this competition.

This inventive team free-kick proved the point. With the Romanian defence expecting a routine cross, Brolin scuttled from behind the wall onto a slide-rule pass and fired just under the bar from a narrow angle. Brainy.

Before Roberto Carlos, another Brazilian left-back was notorious for unleashing scud missiles from set-plays: Branco.

Here, with the game poised at 2-2, the seven members of the Dutch wall lined up like firing squad victims as the snake-hipped Brazilian embarked on a run-up longer than Freddie Flintoff’s. When he finally arrived at his destination, Branco drilled a swerving effort past wall, keeper and team-mates into the bottom left-hand corner.

The Bulgarian was so moody that it sometimes felt like he was punishing the ball for an unknown transgression against his family. Here, ‘The Dagger’ gave the offending sphere a spanking it would never forget.

Team-mate Ivaylo Yordanov won it and spotted Stoichkov giving it toes through the middle. The forward took the glorious pass, had a touch, then smashed it left-footed past the near post. The crackpot forward then celebrated with some barmy air-boxing. Calm down, dear.

He was 6ft 4in, but while Andersson could execute a towering header with the best of them, he was also living embodiment of the phrase “Good touch for a big lad”. This was a strike from a seemingly impossible position.

Andersson ran onto a cross-field pass at the far left-hand side of the area, with Brazilian defender and keeper well positioned. He controlled it on his chest, let the ball bounce and then struck a perfect hybrid of volley and chip – with the outside of his boot! – over and across both his opponents.

He may have been more gakked up than Shaun Ryder on a stag weekend, but El Diez’s sole strike of the tournament before he departed in disgrace was worthy of the Maradona name.

He applied the finishing touch to a fine piece of team play: Jose Basualdo and Gabriel Batistuta ping-ponged the ball through a gaggle of confused Greeks before their captain slammed it home from the edge of the area.

Maradona celebrated with the kind of roar that makes Andy Murray’s war cry look like a yawning shrew. Brilliant, mental: Maradona in a nutshell.

Vintage Jurgen. He cleverly ghosted away from his South Korean marker into the heart of the box, and with his back to goal, received an extremely quick ball just behind him.

His reaction was sublime: Klinsmann flicked it up in the air with his right foot, swivelled 180 degrees to face forward, and spanked it home with his jackhammer left. The energetic Teuton was celebrating by the corner flag before the Koreans had realised what happened.

In a 2006 poll, Hagi was voted the 15th greatest Romanian of all time. The other 14 must have had some mean skills, because this was transcendental.

From a harmless position on the left wing, Hagi looked up to deliver a cross, but spotted the keeper slightly out of position and chipped neatly over his head into the top corner. Try doing that, influential poet and supposed third-best Romanian ever, Mihai Eminescu!

His nickname – "the Maradona of the Arabs" – was unimaginative, but it was certainly accurate: this was a fair take on the Argentine’s much-lauded wondergoal four years earlier against England.

Starting deep in his own half, Al-Owairan dashed upfield like a man possessed, beat five defenders with his fleet feet and pumped the ball past goalkeeper of the tournament Michel Preud’homme from an acute angle. It sent the Saudis through to the knockouts, where they were dumped out by Sweden.

This was once voted the sixth best World Cup goal of all time, but it’s hard to see how it doesn’t deserve joint-top billing with El Diego’s crowning moment.