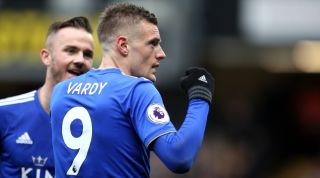 Just for a minute, try to forget Arsenal, Chelsea, Liverpool, Manchester City, Manchester United and Tottenham. Some pranksters have also claimed that there are 14 other clubs in the Premier League too.

Rondon is among the most underrated players in the Premier League – just look at his goals return, despite playing for one of the division’s least creative teams.

Newcastle have their talismanic Venezuelan to thank for being just above water in the survival fight. Rondon wins considerably more in the air than he should, runs his socks off, has a great touch, and is superb at bringing team-mates into play.

The struggles of centre-backs have contributed to 2018/19 being on course to break the goals-per-games record in a Premier League season – the current average is just above the high of 2.81, set in 2011/12 – but Diop has been a seldom exception.

The 6ft 4in Frenchman put in colossal performances against the big guns, and was singled out for praise by Mauricio Pochettino, who declared: “That’s the best I’ve seen anyone do [against Harry Kane].” No mean feat.

Fans, pundits and Harry Redknapp may have finally got used to the fact King is Norwegian and can’t be called up by England, but they continue to undervalue the former Manchester United youth player.

Callum Wilson was partly indebted to his attacking sidekick for the showering of praise he earned – and even an England cap – earlier in the campaign. King chases lost causes, holds the ball up well and, most importantly, makes things happen when he gets on it.

How many good left-backs do France have? Despite competing against Lucas Hernandez, Benjamin Mendy and Ferland Mendy, Digne has won 23 caps for Les Bleus.

Defensively sound, the former PSG and Barcelona man boasts an impeccable touch, is one of the finest crossers around and has scored three long-range corkers this term.

One of the top dribblers in the Premier League, the Brazilian is also rapid and packs serious power in his right boot. Anderson’s talent draws regular man-marking, which frees up space for team-mates, plus a lot of fouls – an underrated quality in many players.

He's been criticised for not scoring enough goals in his last two seasons at Lazio, but there's been no cause for such complaints since he joined the Hammers.

Manchester City and Manchester United are circling. Gareth Southgate is scrutinising. And yet Wan-Bissaka continues to shine unfazed. "He actually made a mistake and I was relieved because I was starting to think he might be a robot," his manager Roy Hodgson declared recently.

Impressive both defensively and offensively, the young right-back is unfortunate that Kyle Walker, Kieran Trippier and Trent Alexander-Arnold stand in his way of England caps. For now, anyway.

He's lost form of late, but the young Brazilian is a fine player nonetheless. Richarlison’s hunger to get on the end of crosses is exemplary, and he’s quick, strong and direct. Now a regular in Tite’s Seleção squad.

Jimenez is finally having the season to show why Diego Simeone pursued him so doggedly in 2014. The Mexican has already surpassed double figures for the season in this exciting Wolves team, and boasts so many of the qualities that make him suitable for the rigours of the Premier League: an excellent first touch, hold-up play and superb link-up with team-mates.

If Wolves fail to make his loan move from Benfica permanent, a bigger club surely will.

Arsenal, Chelsea, Liverpool, Manchester United and PSG have all been linked with the dynamic midfielder who has made no secret of his desire to move on up soon. Despite his hulking frame, the all-action Doucoure is nimble in midfield, and a fine passer who also uses his long legs to win tackles astutely. Throw in a handy knack of goalscoring and you have a fine all-rounder.

He was a good wide man. He is now an excellent centre-forward – when not trying to engineer a move to China, anyway. Schwarzenegger-strong, skilful, imaginative and a good finisher, what might the Austrian do playing north of Eden Hazard for Chelsea?

Indiscipline and inconsistency are glitches in the Arnautovic model, and he’s injury-prone, but there aren't many players you’d prefer leading your line than the opponent-bullying son of Floridsdorf.

Lanzini sizzled in Argentina’s 2-0 win over Italy and synchronised enchantingly with Lionel Messi in a thrashing of Haiti, only for ruptured knee ligaments to cruelly rule him out of the 2018 World Cup. And how Argentina’s impotent midfield missed his invention.

West Ham have just got it back following that injury, and will do well to ward off VIP admirers in the near future if he picks up where he left off. Twinkle-toed and a master at defence-decrypting through-balls, ‘The Jewel’ is a dazzling joy to watch.

It’s almost a shame that Vardy at his frightening best didn’t get to spearhead a more regular Champions League club, but then again, it's always felt like Leicester has been the perfect home for him since their promotion to the Premier League in 2014. It’s definitely a shame that his England opportunities were limited by Harry Kane and formation, however – although the Premier League winners’ medal and record scoring streak probably helps.

Despite his age and playing for a club in transition, Vardy is still doing what he has always done: never giving opponents chance to breathe, making mad dashes and scoring goals. He's 32 now but showing no signs of slowing.

The £100 million price tag being paraded around Neves may have been a little exorbitant, even in today’s market, but it's easy to see why Manchester City are potentially interested in the Portugal midfielder. With extraordinary vision and admirable industry, Neves is one of the finest passers in Europe and can score from distance too – as his ludicrous personal goal of the season competition in the Championship last year demonstrated.

It was always clear that good things awaited after captaining Porto in the Champions League aged 18.

The Yorkshireman’s commanding performances at the 2018 World Cup led to speculation that Manchester United would make him the most expensive defender in history. That moved failed to materialise, and despite Maguire signing a five-year contract thereafter, England’s elite are sure to be keeping tabs on him.

Maguire is dominant in the air but also great on the ball, and has that Steve Bruce-esque knack of getting in the way of everything. He'll get his big move eventually.

Unfathomable trickery, speed and positional flexibility would make Zaha – who was afforded only two Premier League appearances for Manchester United – an asset for any of the top six.

Chelsea have been repeatedly linked, but Borussia Dortmund look most likely to spend the €64 million they received for Christian Pulisic on the south Londoner this summer. Either way, Crystal Palace know they face their most serious battle yet to keep hold of their prized asset, though few Eagles would begrudge him moving on for a second time if Champions League football was on the table.