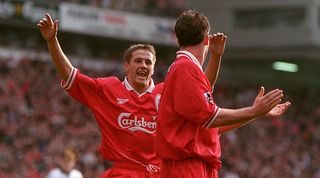 In 1998, Liverpool opened their purpose-built academy facility in Kirkby, the same year Steven Gerrard made his first appearance for the club. The move followed the emergence of several youngsters during the 1990s, and two years after FA Youth Cup success; the feeling was that much more would follow.

Since then, 18 local-born players have been handed their debut for the Reds but none have gone on to establish themselves. Trent Alexander-Arnold became the latest local lad to make his bow, doing so against Tottenham in the League Cup last season, and the hope is that he will be able to go on and establish himself where others have failed.

There have been others who have clocked up more first-team appearances, including current squad member Jon Flanagan, but none have made more than 50 league appearances for the club.

The influx of foreign-born players to the academy during Rafa Benitez’s time at the club led to the likes of Dani Pacheco, Krisztian Nemeth and Damien Plessis being heralded as Next Big Things, but ultimately none came close to first-team roles.

Nowadays, Liverpool’s production line looks back to the level of the mid-'90s, with 11 academy players having made their debuts under Jurgen Klopp since he took charge two years ago. Alexander-Arnold and Ben Woodburn are the two current stars making the move to first-team level, and there are plenty more who are primed to do the same soon.

Here, we rank the top seven graduates from the Reds’ academy in the Premier League era...

There’s a famous picture of seven Liverpool academy graduates, taken in 1999, with Scotsman Dominic Matteo on the back row alongside Jamie Carragher and Steven Gerrard.

Yet the 1999/00 season turned out to be the centre-back’s last at the club, having made 155 appearances over seven seasons. Had it not been for injuries, he may well have stayed much longer – early comparisons had previously likened him to Alan Hansen. Matteo would confidently stride out from defence in Roy Evans’ back three, long before ball-playing centre-backs became the norm in the Premier League.

He went on to enjoy relative success elsewhere, captaining Leeds United, but injuries continued to plague him and after spells at Blackburn and Stoke, he hung up his boots in 2007.

Warnock is the only player not featured in that aforementioned image who makes our list, with the left-back making his debut in 2004.

For a time it seemed he would be the solution to the problematic left-back position at Anfield, but Rafa Benitez signed Fabio Aurelio to compete with John Arne Riise in 2006 and Warnock was sold to Blackburn.

The likeable Lancastrian is still plying his trade today with Burton Albion, aged 35 - his seventh club since leaving the Reds.

A few months before Gerrard made his Liverpool bow in November 1998, Owen had announced himself on the world stage in France by scoring that goal against Argentina.

While his reputation on Merseyside has since been tarnished by his move to Manchester United in 2009, Owen’s record at Liverpool is phenomenal. Having scored on his debut as a 17-year-old, he hit 23 goals in each of his his first two full seasons. Such clinical finishing certainly wouldn’t go amiss at Anfield now.

Owen's scoring record stood at 158 goals in 297 appearances – a better than one-in-two ratio. He’s the last Englishman to win the European Footballer of the Year award, in 2001 – the year he single-handedly won an FA Cup final for the Reds.

Another who practically won a trophy for the club by himself was McManaman, who produced a virtuoso display in the 1995 League Cup Final against Bolton.

His silky dribbling skills wowed the Anfield faithful in the ‘90s; the perfect player in Evans’ attacking system. For years after Macca left for Real Madrid, Liverpool struggled to find a replacement for his direct running and ability to beat defenders on either side.

Tap-ins weren’t his thing, and the winger scored memorable goals away at Celtic and Arsenal, as well as against Leeds and Aston Villa at Anfield.

Perhaps no Liverpool player in recent history epitomises the attitude and spirit of the city like Carragher. The images of the cramp-ridden scouser blocking a cross in Istanbul sum him up.

He’s nowhere to be seen in the images as the Champions League trophy was first lifted that night, struggling with cramp at the back of the podium - but he was a key player at the back, whose fighting spirit had been pivotal to reaching the final and then somehow overcoming Milan.

After spending years as a utility man, playing at right- and left-back – and previously even a central midfielder – Carra was transformed by Rafa Benitez into one of Europe’s best centre-backs.

After 737 appearances for the club, he perhaps retired too early in 2013. One thing is for sure: Liverpool could use a Carragher or two in their defence today.

After making his debut in the League Cup in September 1993, an 18-year-old Robbie Fowler then hit all five against Fulham in a second-leg 5-0 win at Anfield. Some introduction.

A couple of years later he was hitting a five-minute hat-trick against Arsenal, in a season when he scored 31 goals. Fowler followed that up by hitting 36 the next season, then 31 the one after that.

Fowler is arguably the most clinical finisher in Liverpool’s history – a true goalscorer. Yet a serious knee injury in 1998, aged 22, halted his prolific progress. “I could have gone on to become the best in the world,” he said recently – and it’s certainly true.

Still, 183 goals in 369 appearances over two spells at Liverpool isn’t a bad record.

There’s not much to be said about Gerrard that hasn’t already been said. Plenty will debate where he stands among Liverpool’s greatest ever players, but he’s without doubt the greatest academy product.

Arguably, he was actually an un-academy-like player: providing thrust, determination and sheer recklessness that some critics of modern academies say is coached out of youngsters these days.

Some may say that Kenny Dalglish is Liverpool’s greatest player, but the Scot was playing during an era when he was surrounded by similarly talented players. Gerrard dragged Liverpool through the noughties, at times surrounded by the likes of El Hadji Diouf and Salif Diao.