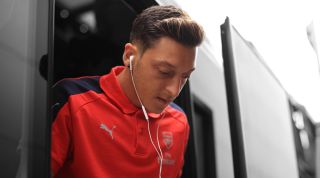 Pep Guardiola has simplified Sterling’s role by instructing him to stand still on the wing rather than float infield in search of the ball, removing the England international’s mental blockage while creating space for Kevin De Bruyne to flourish. Guardiola instructs his wingers to hug the touchline and only move infield once the ball enters the final third – that way the opposition defence has to stretch wider, which in turn creates space in central areas.

Sterling benefits from this by receiving the ball with space ahead of him in which to build up speed. Unsurprisingly, his dribbling skills suddenly look a lot more refined. Sterling still needs to improve his final ball, but is already indirectly creating chances; his mazy runs are a huge distraction for opposition defenders.

The Belgian may have picked up more loose balls than any other player, but this merely reflects Watford’s domination and the amount of work Fellaini was forced to do. He made just two tackles and zero interceptions, often struggling defensively in between the excellent Troy Deeney and Odion Ighalo.

Watford’s 3-5-2 shape was impressive. Walter Mazzarri played Ighalo as a left-sided targetman, with Deeney and Roberto Pereyra constantly finding space in Fellaini’s zone as the Belgian was pulled out of position to track Ighalo. Daryl Janmaat shifted up and down the right wing constantly and his team-mates shuffled across to cover the spaces – essentially allowing Watford to flit between 5-3-2 and 4-4-1-1. Jose Mourinho’s midfield had no idea how to handle the situation.

Guardiola’s preference for short passing football has been overstated. He likes to play quick, penetrative football and the centre-back plays an important role as some of his bravest passers. It’s why John Stones was signed from Everton, and why the adventurous Kolarov has been given a new position.

Most of the Serbian’s long balls were in search of Sterling (see above), but occasionally they were slightly more wild. Guardiola has decided to take a more direct approach against deep-lying teams, who may be naively assuming that the Catalan plays a predictable system.

Only N’Golo Kante made more tackles and interceptions than Gueye’s 248 last season, and while the Senegal international’s good form has continued at Everton, his style of play has changed slightly. Last year he completed 4.1 tackles and 4.0 interceptions per match, but this season his spread is more lopsided – 6.2 tackles and 1.4 interceptions.

One reason for this is that Gueye is given licence to be more aggressive in his defensive play, whereas at Villa he was expected to sit deep and control the onslaught. His eight tackles against Middlesbrough were decisive, preventing Stewart Downing and Gaston Ramirez from counter-attacking effectively. Everton’s great start to the season is largely thanks to Gueye’s magnificent form.

Arsenal amassed 24 shots in their victory over Hull, and their dominance in this game (61% possession) enabled Ozil to dictate the tempo from deep within the opposition half. The German also topped the charts for most passes in the final third (62/68).

Alex Iwobi and Theo Walcott stole the show, causing havoc for Mike Phelan’s side, while Alexis Sanchez was lethal in his false nine role. Hull’s defenders couldn’t cope with how he dropped off the frontline, which in turn created space for Iwobi and Walcott to sneak into the box ahead of him. Ozil’s role in this was also crucial – he largely played simple one-touch passes in the No.10 slot, setting the tempo and gradually wearing down the surrounding defenders.

Tottenham’s South Korean star looked full of confidence after his brace against Stoke, and injected a directness into Tottenham’s attack that was missing on occasions last season. The 24-year-old could have a big role to play in 2016/17.

Son is considerably less delicate or technically gifted than most of Tottenham’s attacking players, but for games in which Mauricio Pochettino’s team will face deep-lying opposition (such as Sunderland) his forceful demeanour prevents them from appearing blunt-edged.

Moussa Sissoko should provide a similarly aggressive approach from the other wing, although he was largely ineffective on Sunday. Spurs will be frustrated that they failed to convert more of their chances, but the variation these two players are adding to their build-up play is hugely encouraging.

Middlesbrough’s tactics largely revolve counter-attacks and quick distribution to the flanks, where their wingers look to whip early crosses into the box for targetman Negredo. The simplicity of their approach against Everton was clearly not effective, although fans will be encouraged by how quickly Negredo is settling back into English football.

Pogba's stats analysed: How the record signing's influence has waned

After scoring once and assisting twice in his first two games, the Spaniard has gone a bit quiet. However, he continues to look menacing in the air and has now won 60 headers this season – more than any other Premier League player.