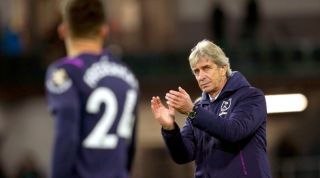 One of West Ham’s most impressive moments this season was their draw away to Bournemouth at the end of September. Having been humiliated by Oxford United three days before, they found themselves in a hole at Dean Court, 2-1 down on the road and behind to an opponent with a newly resilient core.

They dug in and clawed their way back, though, finding an equaliser through Aaron Cresswell and heading back to London with not just a point, but their pride restored.

In retrospect, what was impressive that day was exactly what has become so discouraging since. It was the kind of situation in which West Ham teams of the past would have failed. Bournemouth were energetic and vibrant, they actually had a goal disallowed which would have made it 3-1, and it was the sort of challenge which the visiting supporters would probably have expected their players to shirk.

Because, unfortunately, the way this side has been built engenders suspicion. West Ham’s recruitment is now under the supervision of Mario Husillos, but their mentality is much as it was prior to his arrival in 2018. The club still look to sign name players and still typically from European clubs who dwell above them in co-efficient terms.

So the fear is always the same: why are they here and, during a season’s bad periods - which are inevitable - how will they respond?

And that’s what was so encouraging about that performance in Bournemouth. When Manuel Pellegrini needed an equaliser on the south coast, it was Felipe Anderson and Andriy Yarmolenko who led the charge to find it. Both were outstanding in the final half-an-hour, bewildering their markers with their technical ability and, eventually, combining to create Cresswell’s equaliser.

It’s important to characterise this correctly. These players shouldn’t be under any extra scrutiny because they weren’t raised on jellied eels and mash, but because they don’t have any natural synergy with West Ham’s ambition. They've been tempted into mid-table by a large contract, with their performance depending on their determination to return to a level they've already attained. Both have played in the Champions League and in major European divisions, and the expectation is that they should be energised by West Ham's chase for seventh place?

Behind the story: Inside Lazio's ultras

It just seems so unrealistic. It also hints at an obvious culture clash, between players who have made a compromise in status in order to play for West Ham and those whose reputation depends more on what the club is able to do.

It’s not really a footballing question, more a human one. The intention isn't to denigrate anybody's professionalism, just to wonder how obstructive these subliminal conflicts are and how harmonious any team containing them can ever be.

Those questions extend well beyond Anderson and Yarmolenko, too. Jack Wilshere’s career has floundered for different reasons, but he’s another example of a player chasing back across ground already covered, so is Sebastien Haller, who six months ago was on the verge of a European final. And, even amidst Villarreal’s recent slump, Pablo Fornals had been playing regularly in the Europa League.

For the sake of a comparison, what seems to be working at Leicester at the moment, in addition to other obvious incubating factors, is the recognition of this very fallacy. Brendan Rodgers’ side is built around a core group of players roughly similar in age, but also equally invested in the club’s journey. James Maddison, Ben Chilwell, Harvey Barnes, Youri Tielemens, Wilfried Ndidi; there's a collective cause there. Those players all have their own individual aims, but for now they're in vague harmony and bound by the recognition that Leicester's progress serves their ambition equally.

That’s a very different dynamic to the one that exists at West Ham and it's impossible not to conclude something from the divergent outcomes.

Yes, there’s more to this recent losing sequence than recruiting problems. Roberto’s form is a major issue, clearly, and – quietly – the emotional attachment to a diminishing Mark Noble is also inhibiting. But within these last five games (four losses, one draw) broader themes have developed which are much more troubling – the inconsistency of the pressing, for instance, which allows the opposition to move the ball from south to north with great ease. The lack of protection afforded to the midfield by the attacking players and the department’s subsequent inability to properly influence games. And then the natural result of those two weaknesses: chances being conceded regularly and in great quantity.

It’s a situation which describes certain technical weaknesses, but it’s also betraying emotional disconnects within the side. Over the last week, a succession of dressing-room leaks – recorded most clearly in thisarticle for The Athletic – have reinforced the perception of a team full of agendas, in which adversity seems just to draw accusatory stares.

It’s just theory, but it’s well supported at the moment. Talent is important in making the jump from one level of the game to the next. But, as West Ham continue to find out, that kind of progress will always depend on a level of motivational alignment which, for now, their by-the-numbers transfer policy prohibits them from making.

TRANSFERS Erling Braut Haaland is the latest young star to be chased by Europe's elite clubs. He shouldn't go to any of them

QUIZ Can you name the 45 people to have played AND managed in the Premier League?