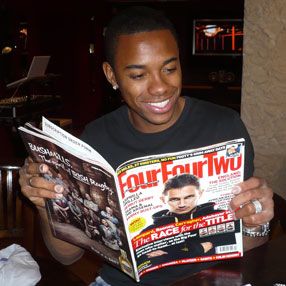 You’ve been a revelation this season, and a key component of Real’s sparkling form. How do you explain this?
I think first because of the experience I’ve acquired. I’ve matured and I’m feeling good about myself. Also, when the team is doing well, we all look better individually.

Bernd Schuster seems able to get the best out of you in a way that Fabio Capello could not. Has he asked you to play a different role?
Schuster and Capello are different. I have a better understanding with Schuster. He puts me in my best position and lets me play freely; he lets me have fun on the pitch. Capello’s style was different. He wanted me to play deeper and mark all the time, so I had less opportunities on the ball. Thanks to Schuster I can attack with confidence.

Madrid have used you both as a striker and a winger. Which do you prefer? Or is defining positions not important?
I like to play up front, closer to the goal. I see myself as a centre-forward. And this season, even by the halfway point, I’ve scored more goals than I did before.

Before this season, when things weren’t going so well, did you ever question your decision to come to Europe?
Never. I always wanted to play for Real and I had four years at Santos, so I gained plenty of experience. Often, outstanding players move after just one season in Brazil. I came to at the right moment, and now feel I’ve adapted.

Many players have been dubbed the ‘new Pele’, but you have the personal endorsement of the man himself. How does that make you feel?
I’ve always had a very good relationship with Pele. I’ve known him since I was little, and was always a fan. But Pele is Pele and Robinho is Robinho. There’s been nobody else like him and never will be. I can go far, but never as far as Pele.

Have Real Madrid now fully shaken off the ‘Galactico’ tag?
We’re not Galacticos, but together we’re number one. We have great individual quality, but we also have real fight and a champion’s mentality. The stats show this is Real’s strongest squad. Much of that is down to Schuster. He coaches the right way and brings the best out of his players.

The partnership between yourself, Van Nistelrooy and Raul has been the best in Europe this season. What’s the secret?
We complement each other well because of our different styles. I play more freely and can use my skill, Raul is a very intelligent guy who leads from the front, and Ruud is a great goal-getter. As the days go by we’re becoming more and more in tune with each other.

You recently became a father. How’s parenthood treating you?
I’m loving it. It’s the best experience of my life. [Robson Souza Junior] is in very good health. He’ll be here with me soon. Now everything I do, I think of my child first, about his future and his security.

How do you see your career unfolding?
I want to stay at Real until I am 30, then return to Brazil and play one more year for Santos before I retire.

How do you think Fabio Capello will fare as England manager?
Time will tell. Capello’s style wasn’t right for Real, wasn’t what the fans wanted. We won but we didn’t win beautifully. Real is not just about winning; the fans pay to see a spectacle. With Capello we didn’t provide that.

For more exclusive comment from Robinho, and news on his life on and off the pitch, visit �his official website at www.fobazo.com