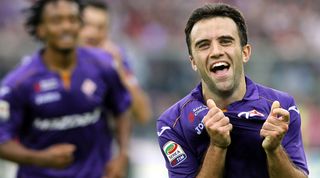 Eight wins in a row and counting. No longer can the rest of Serie A ignore AS Roma’s claims as genuine title contenders.

Friday's 2-0 victory over Napoli kept Rudi Garcia’s 100% start to his short time in Italy intact, and drew Roma level with the Juventus side of 1985/86, who achieved the same feat before going on to claim the Scudetto.

The Old Lady had also won their first eight games back in the 1930/31 season, and went one better as recently as 2005/06, only for Calciopoli to wipe that off the official records along with the unsolicited title that followed.

Diego Maradona was in the stands at the Olimpico in Rome to see if his old side could reinforce their own claims for top spot.

However, having spent the previous few days either dodging the Italian tax men or sounding off about just about everyone in the game during a press conference to promote a video of his career, El Pibe de Oro slipped off into the night before the final whistle, with no more than a second glance towards the pitch.

By then Miralem Pjanic had already done the damage with a sublime free-kick even El Diego would've been proud of. That came just before the break, while a penalty with less than 20 minutes remaining rounded off an unforgettable week for the midfielder, who played his part in helping Bosnia-Herzegovina qualify for the World Cup finals for the first time in the country’s history.

The Giallorossi could write themselves into the history books next weekend with a win at Udinese, but they will have to do so without Francesco Totti, who was forced off early on in the first half with a hamstring problem.

The chasing pack needed to put their feet to the floor soon. Everyone has been waiting for Juventus to slip into gear.

Their trip to Florence brought with it a myriad of concerns, from the heated nature of facing Fiorentina at the Artemio Franchi to the growing injury list facing Antonio Conte in attack. Mirko Vucinic and Fabio Quagliarella were sidelined, not to mention the delicate disciplinary matter surrounding Arturo Vidal.

The midfielder had arrived back late from World Cup duty with Chile, and had even posted a photo on Twitter of him celebrating with his friends when he reportedly should have been on the flight back to Italy. Conte had no other option but to bench the tardy South American, and for most of Sunday afternoon it seemed that would make little difference to the outcome as the Bianconeri cruised into a 2-0 half-time lead through a Carlos Tevez penalty and close-range finish from Paul Pogba, after winger Juan Cuadrado made a hash of an attempted clearance.

Going into the break only few would have expected the stunning comeback that saw the Viola hit four unanswered goals to run out 4-2 winners, turning the city into a sea of purple flags and gave the late-Autumn tourists a rare glimpse of Florentine fervor of a different kind.

Fiorentina had last defeated their bitter enemy at the Franchi in late 1998, and on that day it was Gabriel Batistuta who scored the only goal of the game. This time it was Giuseppe Rossi writing his name into Fiorentina folklore with a half-trick in the space of 15 minutes that left Conte on the brink of tears on the sidelines.

Rossi has certainly known his fair share of frustration and despair after he was sidelined for nearly two years by successive knee ligament injuries, but in the Renaissance city the American-born frontman is making up for lost time. His three-goal sweep at the weekend kept him on top of the Serie A goalscoring charts with eight to his name.

As well as his success at the sharp end, the 26-year-old has surprised observers with the way he has regained match fitness following that traumatic two years. He first fractured his knee ligaments in 2011 when he was playing for Villarreal in Spain, and then again when he finally returned the following April.

Fiorentina did, however, take a chance on the talented player who had broken into the Italy squad due to his Italian parents. If he continues to impress like this then he will no doubt take a well-earned spot in the Azzurri for the World Cup Finals next summer.

In the meantime it's all about club form, though, and with Mario Gomez out injured the onus has rested on Rossi to lead the attack.

Home coach Vincenzo Montella was left in something of a quandary about how he should face the champions, and opted to play Alberto Aquilani in support of Rossi. It was a ploy that had little merit as not only did the natural midfielder contribute little or nothing from an advanced position, an isolated Rossi dropped further back just to get a touch on the ball which negated any threat in attack.

With Fiorentina trailing by those two goals at the interval and looking completely demoralised, Montella admitted that he was ready to replace his striker who had picked up a knock to his lower back, and introduce another player who had seemed to have dropped off the radar: Joaquin.

The Spanish winger did come on but for Aquilani, and with Cuadrado moving to the left there was new vigor and pace to the home side's play as the ball was spread wide on both flanks. Suddenly, Juve were jolted out of their comfort zone.

A Jaoquin run and cross of old soon led to Cuadrado firing over - and it should have given Conte warning that this match was far from over. It was game on when Rossi converted from the spot after another substitute, Matias Fernandez, was upended after replacing the injured Massimo Ambrosini in the first half.

Serie A, never mind the Franchi, had not witnessed such a turn of events in the space of a quarter of an hour as Juventus crumbled to concede four goals for the first time ever from a two-nil advantage. Gianluigi Buffon could have done better when getting across to cover the equaliser, even if it was a well-struck angled shot from his Italy team-mat. But the goalkeeper could do little when left completely exposed for the third from Joaquin.

The fourth came from another swift counter-attack, with the unerring left-footed finish into the corner completing, not only what was the comeback of this or any season, but also the rebirth of Rossi as one of the deadliest finishers in the game.