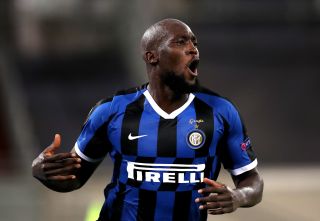 Inter were already 4-0 up late on Monday evening when Romelu Lukaku collected a pass from Stefan de Vrij just inside the Shakhtar half. Sensing the dread behind him, the Belgian swivelled, fired up the engines, and powered beyond his marker towards goal. A composed finish capped a sensational all-round display, as Inter booked their place in Sunday’s Europa League final against Sevilla.

It was merely the latest composed finish from a phenomenal debut season in Milan. Lukaku’s semi-final brace took his tally to 33 in 50 appearances for the Italian club, and ensured his record of scoring in every Europa League match this season remains unbroken.

The speed of Romelu Lukaku! 💨🍃There was no stopping the Belgian who is on red-hot form! 🔥His 19th Europa League goal! 👏#Club2020 pic.twitter.com/9qJQ1hVIXsAugust 17, 2020

"I'm a forward and I'm here to score, it's something inside me," Belgium’s record marksman said after the game. Meanwhile, those in the BT Sport studio discussed the differences between the Lukaku of today and the one at Manchester United.

"Lukaku didn’t struggle to score at United - he scored goals - but he wasn’t happy," said former United and Inter midfielder Paul Ince. "Sometimes you find the right person, the right country. If you’re happy you will perform.”

On Wednesday on TalkSport, Darren Bent and Glenn Murray discussed whether United had been foolish to let him leave last summer. An interesting topic, but one that misses the point slightly. Simply keeping Lukaku was never a good idea. He’s a player that thrives on confidence and trust, something he rarely felt at Old Trafford.

“I made my decision to leave United around March,” the Belgian told Sky Sports back in January. “I went to the manager's office and told him it was time for me to find something else. I wasn't playing. United had made space for the younger players to come through. I thought it was better for both sides to go separate ways.”

Lukaku’s €80m switch to Inter saw him finally join up with Antonio Conte, a manager who had desperately tried to sign him for both Chelsea and Juventus in the past. A goal on his Serie A debut at home to Lecce immediately ingratiated him with the club’s fanbase and the goals kept flying in all season.

While his time there has been marred by some shameful racist abuse aimed at him, there has been plenty of on-field appreciation for Lukaku's game in Milan, something which was lacking in his final season in English football. He's also fitter than he ever was in England, thanks to a strict fish diet laid out by Inter's chief nutritionist. The results have been extraordinary.

"He looks fit and lean," added Ince in the BT studio. "Talking about when he was at Manchester United, he didn’t look like he could get around the park. He’s just running past people now; the pace!"

The 27-year-old finished this season the third-highest scorer in Italy behind Cristiano Ronaldo and Serie A veteran Ciro Immobile, while helping Inter finish just a single point off champions Juventus in the league. Should the Nerazzurri lift the Europa League against Sevilla at the weekend, it will cap a stunning debut campaign in new surroundings; the fresh start he needed.

During his eight years in England, the former Chelsea and Everton striker was regularly criticised by fans and the media. He supposedly had a poor first touch, he was sluggish, lazy, didn’t do enough out of possession and rarely turned it on in the big games. This, about a player who scored a goal every 168 minutes in the Premier League; the division’s 19th highest all-time scorer with a 113 goals in 252 appearances.

Lukaku and Manchester United somehow never felt like a good match, but his failure to prove a success at the club has less to do with him as a player, and more to do with the prevailing attitude of fans, the media and pundits. As Paul Ince said, it's got a lot do with happiness, and Lukaku appears to have found that at last in Italy.

RONALDO AT INTER MILAN The UEFA Cup, the goals and the injuries – the full story of his time in Italy