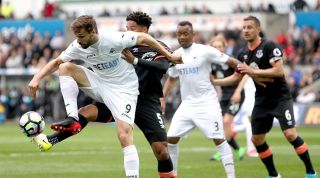 Everton have lost an away league game in Wales for the first time since a 1-0 defeat to Cardiff at Ninian Park in December 1956, having previously been unbeaten in their last 10 games there

Swansea moved out of the relegation zone for the first time in six matches after a huge win over Everton at the Liberty Stadium. Fernando Llorente got the only goal 15 minutes before half-time when he nodded home from Jordan Ayew's cross – the Spaniard's seventh strike of the campaign with his head.

Paul Clement's team have taken seven points from their last three matches to move a point above Hull and put survival in their own hands, with their two final matches coming against Sunderland (a) and West Brom (h).

Mame Biram Diouf's goal was his first in the Premier League since the final game of 2015/16 vs West Ham, 356 days ago

Bournemouth and Stoke shared the spoils on the south coast, but Mark Hughes will be furious after two key decisions went against his side.

Stoke hadn't scored in any of their last six Premier League away games, but got a helping hand in the 33rd minute when Lys Mousset – making his first Premier League start for Bournemouth – diverted a corner into his own net. Before that, Harry Arter had been fortunate to stay onto the pitch after a horrendous challenge on Joe Allen which only led to a booking.

Eddie Howe's side made the most of that decision from referee Paul Tierney, and drew level after the interval when Junior Stanislas grabbed his fifth league goal of the season following fine wing work from right-back Adam Smith.

Stoke re-took the lead through Mame Diouf, who managed to scramble in from close range after Geoff Cameron's high cross was headed down. But the Potters were left cursing the officials once more as Bournemouth stole a point late on, the ball eventually ending up in the net after a touch from Ryan Shawcross despite Josh King having been offside in the build-up.

Sam Vokes has netted two goals in his last three Premier League games, as many as in his previous 23 in the competition

After a dismal first half, Burnley broke the deadlock 10 minutes into the second half when Ashley Barnes set up Vokes for a close-range finish. But their lead lasted less than five minutes as Salomon Rondon found space inside the box to break his 19-game goal drought and bring the Baggies back level. The Venezuelan's last goals for West Brom came in a mid-December hat-trick against Swansea.

Craig Dawson then headed home from (yep, you guessed it) a corner to put West Brom ahead, but Vokes was there late to earn Sean Dyche's side another valuable point.

Jermain Defoe's goal was his first in 1,035 minutes of Premier League action

They might be dead and buried, but Sunderland can still influence this season's Premier League. Here, Hull's survival hopes took a serious dent as the already-relegated Black Cats came away from the KCOM Stadium with a shock 2-0 victory.

Marco Silva hadn't suffered a home league defeat as manager since March 2014 while bossing Portuguese side Estoril (since then: W34 D7), but the Black Cats put paid to that with an unlikely first win in 11 Premier League matches. Billy Jones struck the first goal of the game, heading home after George Honeyman's corner was flicked on by John O'Shea.

Things went from bad to worse in injury time when Jermain Defoe snared all three points for Sunderland – very much offside in the process. A bad, bad day for Hull.

Riyad Mahrez has scored in his last three Premier League games against Watford, the first time he's done so against a single opponent

Leicester rocketed into the top half with a comfortable win over Watford that means Craig Shakespeare has won all five of his Premier League home matches in charge of the East Midlands side.

Shakespeare's team took the lead after a well-worked short corner was cleared only as far as Nigerian midfielder Wilfred Ndidi, who powered home for his second Premier League goal of the season. The Foxes then doubled their advantage after the break when Riyad Mahrez converted a fine solo effort, weaving his way past two Watford men before beating Heurelho Gomes with a fine finish on his 100th Premier League appearance.

Marc Albrighton capped a fine afternoon for Leicester in injury time when he rattled in off the post from Jamie Vardy's pass.

Watford have now lost 10 of their last 12 away league matches and are still five points shy of last season's points total that led to the departure of Quique Sanchez Flores.

Manchester City moved above Liverpool into third on goal difference with a trouncing of Crystal Palace at the Etihad Stadium.

Palace travelled to Manchester with the scalps of Chelsea, Liverpool and Arsenal to their name from the last five weeks, but a misshapen Eagles side never looked like doing the same to Pep Guardiola's side and were dismantled in a weak second-half display. It didn't help that Jeff Schlupp – usually an attack-minded left-back – started the game in central defence.

Man City got off to a flier when David Silva netted his 50th goal for the club after capitalising on a weak header from Martin Kelly inside two minutes, but they couldn't make their first-half dominance count for more. That changed after the break: first, skipper Vincent Kompany blasted in a beauty four minutes after half-time; then Kevin De Bruyne sidefooted in a shot that Palace goalkeeper Wayne Hennessey will have been disappointed not to save.

The hosts saved their final two goals for late on; Raheem Sterling rifled home from close range after Pablo Zabaleta found him with a cushioned header, before Nicolas Otamendi completed the rout in injury time.