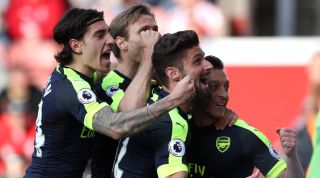 Arsenal kept up the pressure on Liverpool and Manchester City in the battle for a top-four spot with an impressive away win at Stoke. But the final score and the overall dominance of Arsenal’s play don’t quite tell the full story of this match, which controversially sprang into life in the second half.

Arsenal were on top in the first half, Nacho Monreal crashing a header against the post early on, before Olivier Giroud popped up with a poacher’s finish three minutes before half-time.

Arsenal’s 1-0 lead became 2-0 after 55 minutes, following a flowing Arsenal move where Alexis Sanchez fed Mesut Ozil to score. Yet the introduction of Peter Crouch and Saido Berahino after an hour brought a change in the pattern of play. Suddenly, Stoke were making chances and Crouch scored on 67 minutes to halve the deficit. Yet the goal should not have stood. Tough as it was for the officials to see in real time, replays clearly showed the ball coming off Crouch’s hand.

Just as the match looked set for a tight finish, Alexis Sanchez brilliantly settled Arsenal nerves on 74 minutes with a well-placed finish, following Hector Bellerin’s run. Giroud made the game absolutely safe with his second of the match just four minutes later. Arsene Wenger’s side played with urgency to seal a win that puts them a point behind fourth-placed Liverpool, with both sides having two to play.

An eventful, enjoyable game at the Etihad saw Pep Guardiola’s Manchester City side claim third spot in the Premier League, two points above Liverpool in fourth (both clubs having played 36 games).

From before the first whistle, things looked ominous for Leicester - resurgent under Craig Shakespeare, but with first-choice central defensive duo Wes Morgan and Robert Huth absent with injury. The lack of a killer pass frustrated the home side for the first quarter of the match, until a controversial David Silva goal broke the deadlock on 29 minutes. Raheem Sterling, in an offside position, swung a leg at Silva’s finish from Leroy Sane’s cross - causing protests from the Leicester players.

They could have little complaint about the penalty shortly afterwards, however, after Yohan Benalouane’s clumsy challenge on Leroy Sane. The 20-year-old Gabriel Jesus coolly tucked the penalty into the corner and it looked like a case of ‘how many?’ for Manchester City. At least, it did until Shinji Okazaki’s crisp, acrobatic volley six minutes later made it 2-1. It was his first goal in 23 matches to pull his side back into it at half-time.

The major talking point of the second half was a penalty Riyad Mahrez teased out of Gael Clichy. The Moroccan took the spot-kick and looked to have converted - but he had slipped over as he connected, and eagle-eyed officials spotted that he’d struck the ball into his standing foot before it looped into the net. His two touches meant the penalty was ruled out and - despite some Manchester City attacks, then nervy defending at the end as Leicester pushed for an equaliser - the match finished 2-1.

Bournemouth dominated much of this match against a gritty Burnley side who briefly looked like taking an unexpected point. Junior Stanislas opened the scoring after 25 minutes with a fine goal and the in-form Cherries generally bossed the play with their slick passing game, without adding to their total.

That appeared costly late on when a tenacious Burnley side conjured an equaliser after 83 minutes - popular ex-Bournemouth lad Sam Vokes glancing in a lovely header from Johann Gudmundsson’s cross. However just two minutes later, Josh King scored his 13th goal of 2017 to win the game for Bournemouth, who now sit in the top half of the table.

Jay Rodriguez has scored or assisted four goals in his last five league games against Middlesbrough (three goals, one assist)

Two teams with little to play for at the Riverside, with Middlesbrough already relegated and Southampton in mid-table. The Saints hadn’t won in five Premier League games going into this fixture, but looked bright in the first half. Jay Rodriguez broke the deadlock three minutes before half-time and Nathan Redmond made it 2-0 before the hour mark.

Shane Long had the opportunity to put the game well beyond Boro, but his penalty on 64 minutes clipped the top of the bar. He grinned ruefully afterwards - and few would have expected it to be costly. However a surprise source pulled a goal back for Middlesbrough – Patrick Bamford netting his first goal in competitive football in over two years.

That ensured a close finish, but Southampton held on to move into ninth place. Middlesbrough have just a trip to Anfield to end their disappointing Premier League season on Sunday.

The Swans of south Wales took a big step to safety with this relatively comfortable victory over David Moyes’s already relegated Sunderland. The Black Cats never really threatened to pull off another victory, despite their triumph against Hull City last weekend.

Swansea went 1-0 up via Fernando Llorente’s head after just nine minutes to send the away supporters delirious. The second came just before the break and from a surprise source - a terrific strike into the top corner from defender Kyle Naughton, who hadn’t scored in six years.

Swansea sat back in the second half, but Sunderland lacked the cutting edge to find the goal to put pressure on them. The Swans now have a four-point cushion over Hull in 17th. If Hull lose at Crystal Palace on Sunday, Swansea are safe.