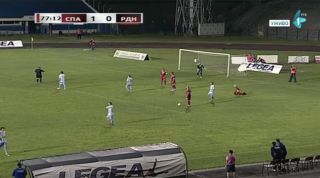 The two sides went head-to-head on the penultimate day of the Serbian SuperLiga season as they battled for the final Europa League qualifying spot.

With both teams locked on 34 points before the match, whoever emerged victorious would take third place and create a three-point gap heading into the final fixture of the season. Unfortunately, it would prove to be a very bad day indeed for Radnicki Nis.

In the 77th minute, with Spartak Subotica already 1-0 up thanks to Nemanja Nikolic's penalty, the hosts were awarded another spot-kick after referee Srdjan Obradovic called a bizarre handball. Replays showed there was clearly no such thing – or anything even close to a worthy penalty shout.

Nevertheless, that didn't stop Obradovic from following through with his bizarre decision. Nikolic went on to score his second and ultimately secure a 2-0 win.

To land that final Europa spot, Radnicki now need to beat Napredak on Thursday and hope Spartak slip up at Partizan Belgrade.

Beitar Jerusalem plan to rename themselves as Beitar Trump Jerusalem