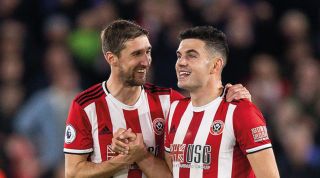 It’s not a question that Sheffield United fans thought they’d be contemplating ahead of the new campaign – but then the Blades’ 2019-20 season didn’t exactly match expectations.

Having been written off as relegation favourites – words which were quite literally pinned on their dressing room wall at the season’s start – United were in the hunt for European qualification until the 37th game of 38, only to fade away after lockdown.

No Blades side has finished higher than ninth in the top flight since 1974-75, but manager Chris Wilder is determined that last year won’t be a flash-in-the-pan experience. On his watch, Sheffield United will be prepared to go again this season. But can they?

Expectation levels have risen on the Bramall Lane terraces, to the point that a few dummies were spat out towards the end of last term when any hopes were ended of Sheffield United qualifying for the actual Champions League. Wilder and his players don’t mind that.

Many have been in the lower leagues for most of their careers and will relish another crack at reaching the European stage. Some supporters are worried that United’s unique style of play, with overlapping centre-halves sent forward to cause carnage, has been found out.

Wilder doesn’t agree. They have played this way since their League One days, and the depth of analysis in today’s game means nothing stays secret for long. The club’s success in 2019-20 was built on a solid defensive record, with only the Premier League’s eventual top three conceding fewer goals across the season.

United’s three centre-halves were all in contention for player of the season honours. Chris Basham offers so much energy going forward, John Egan is a defensive rock in the middle, and Jack O’Connell deserves an England call-up sooner rather than later.

One area in which each can improve, though, is their goal output.

Of the three, only Egan scored last term, and Wilder is keen that players from all positions chip in. Midfielders John Fleck and John Lundstram netted five apiece, which proved helpful as frontman David McGoldrick – so impressive in all other aspects of his play – failed to score in 27 of his 28 Premier League appearances.

If Wilder can coax more goals out of his side while maintaining their defensive solidity, Sheffield United could have another memorable season – even if European qualification may be a dream too far.