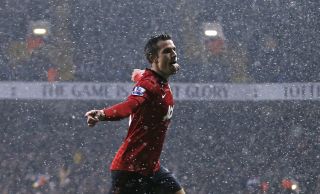 The hardest decision was the last. By now the coffee cups were piling up and the Opta computer was filing a claim for overtime, but there was a serious discussion ahead: who was the best forward in the 2012/13 Premier League? Many a striker had caught the eye, but two candidates stood out ahead of all the others.

Liverpool's Luis Suarez clocked up some remarkable statistics this season. He contributed an astonishing 291 dribbles - an average of 8.8 per match, and almost twice as many as his nearest contender Adel Taaarabt (159). He also touched the ball 363 times in the opposition penalty box, an average of 11 times per game and again miles clear of the second-highest figure (Robin van Persie's 223). He also, let's not forget, scored 23 goals in 33 games for a team that finished 28 points off the title pace but only 25 points clear of relegation.

However, Suarez also contributed some worrying statistics for Liverpool fans - quite aside from the 10-match ban for biting Branislav Ivanovic. Brendan Rodgers' side was easily the most wasteful in front of goal, with 296 shots off target (42 clear of second-placed wastrels Manchester City), and Suarez was a chief culprit: he topped the individual list for shots off target with 71. Indeed, in his controversial absence Liverpool barely struggled in front of goal, scoring 9 goals from 16 shots on target in their next two away games.

Suarez clearly causes problems for the opposition, but not as much as the Stats Zone Premier League Forward of the Year. Manchester United's marquee summer signing Robin van Persie contributed more goals (26 to Suarez's 23) - and although he had more pitch-time, he still took fewer minutes per goal (120.11 compared to 128.48). Perhaps that's because the Dutchman showed better shooting accuracy, getting 65 of his 118 shots (55.1%) on target compared to the Uruguayan's 72 from 143 (50.3%), and a greater chance conversion rate of 22.03% to 16.08%.

The Liverpool man did trump his Manchester United rival in a couple of ways, and not just those two tables he led the league in (291 dribbles and 363 touches in the opposition box). Suarez attempted marginally more passes and with noticeably more accuracy in the opposition's half (72.6% to 66.2%); together with a better crossing accuracy of 25% (to 18.1%), this helped him create 90 chances for his team-mates compared to Van Persie's 70.

However, those 90 chances only yielded 5 assists to Van Persie's 9. That may say more about the relative quality of their team-mates, and it would be interesting to compare their stats for next season if Daniel Sturridge and Philippe Coutinho continue to impress alongside the Uruguayan - if the Anfield hierarchy can convince him to stay.

Van Persie may have been joining a more established team but he still responded brilliantly to the task he was given - not only at the front, but contributing all over the pitch. Frequently helping out his side at defensive set-pieces, the Dutchman won more aerial duels (50 out of 106 for 47.2% compared to Suarez's 12 out of 42 for 28.6%), had a better overall passing accuracy (80.2% to 76.6%, including both halves of the pitch), and contributed a noteworthy 44 clearances to Suarez's 3. In fact, during his first return to Arsenal in April's 1-1 draw, Van Persie contributed more clearances (4) than Suarez managed in an entire season. And scored the point-saving equaliser to boot.

That wholesale contribution to his team's cause helps to get Van Persie the nod from our judges. For averaging better than two goals every three games, he won the Premier League Golden Boot; for his goals and all-round play, he wins the Stats Zone Premier League Forward of the Year Award.