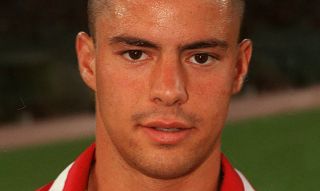 In 1997, Olympiakos finally ended ‘the stone years’ – nine seasons without winning the Greek title. It meant they could participate in the Champions League for the first time, something they – and specifically Stelios Giannakopoulos – marked in style only five minutes into their first group stage match.

“It was a full house; 80,000 supporters were packed in,” Stelios tells FFT. “They were really excited. It was an emotional day for us.” Olympiakos were facing a Porto side featuring Joao Pinto, Zlatko Zahovic and Mario Jardel. The match kicked off a group that also featured Rosenborg and Real Madrid. “I was only 23 at the time,” says Giannakopoulos. Old enough, then, to score one of the competition’s finest goals.

“We had a counter-attack from a Porto corner and we managed to work the ball out to Ilija Ivic on the left wing,” recalls the Euro 2004 winner and Bolton legend. “He saw me in the middle and passed to me.

"I remember my first touch wasn’t very good. But the ball bounced kindly in front of me and gave me the chance to try to lob the keeper. I was lucky to hit the target.”

Giannakopoulos is being modest (though he’s right about the terrible first touch). A delightful lob looped over Rui Correia and in, giving Olympiakos a 1-0 lead they would keep for the remaining 85 minutes.

The midfielder, who since his retirement has been president of the Greek PFA and briefly managed in the third tier, humbly says: “These moments in football are special – I feel extremely proud to score Olympiakos’ first Champions League goal – but to believe in yourself you need good coaches and good organisation at a club. “I’ve always remembered the goal,” he continues.

“I have three boys and they’re proud of their dad. If they want to follow me and eventually become footballers because of something like this, then that’s great. It’s what football is all about.”

This feature originally appeared in the October 2015 issue of FourFourTwo magazine. Subscribe!