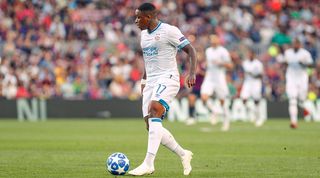 Tottenham Hotspur have got their man. Steven Bergwijn is on his way to North London, after Spurs agreed a fee with PSV believed to be around £30 million.

Despite only being 22, this isn't the first time that the Premier League's finest have been interested in the Dutchman. Chelsea apparently enquired about the star when he was 18, while he's discussed rumours linking him with Manchester United in the past.

But is Bergwijn worth the hype? Will he flourish in England post-PSV like Georginio Wijnaldum, or struggle to recreate his Eredivisie form like Memphis Depay?

Think of a Dutch talent factory and you probably conjure the picture of the prolific Ajax academy. Steven Bergwijn was a product of the Amsterdam-based academy until the age of 14, so he’s been schooled in the “total football” ways synonymous with his nation.

Bergwijn reportedly left the academy due to a conflict with one of the youth coaches - and perhaps history will repeat itself with an acrimonious split from PSV. Regardless of how he left Ajax, the youngster immediately flourished after his move, working his way up the Eindhoven academy to become a starter for the side.

Make no mistake about it - Steven Bergwijn is magnetic to watch.

The 22-year-old has outstanding close control and his dribbling ability is perhaps even as good as Son Heung-min’s. He possesses a lethal long-distance strike in his locker but perhaps most interestingly for Spurs, Bergwijn also has excellent passing vision.

He doesn’t quite have an Eriksen-level range of passing, but he’s capable of breaking lines - should he cut inside and play in the half-space, he could be a useful creator for the on-rushing Dele Alli and Ryan Sessegnon, to make overloads on the Tottenham left.

Bergwijn is a three-time winner of the Dutch title. PSV finished second to Ajax last season but prior to this, but Bergwijn still recorded the second-most assists of anyone in the league and made the bench of the Team of the Season - which was understandably dominated by Ajax personnel.

With many pundits arguing in recent years that Spurs lacked a winning mentality under Mauricio Pochettino, the signing of a player who won the title three times in a row in his home country - in addition to Gedson Fernandes, who won the Primeira Liga with Benfica last year - could be a step in the right direction.

Some footballers grow into their abilities later in life, while others display precocious talents, obvious from an early start. Bergwijn is most definitely latter.

Seemingly always tipped for big things, the Dutchman won the Golden Player award at the 2014 UEFA European Under-17 Championship, as the Netherlands lost on penalties in the final to England. Bergwijn’s in good company with his award - other recipients have included Jadon Sancho, Wayne Rooney, Toni Kroos and Cesc Fabregas.

The 2010 title going to Connor Wickham, however, shows that the award is not always a perfect predicter of greatness.

Love it or loathe it, modern football is about so much more to young people than what happens on the pitch.

Steven Bergwijn embraces being a brand - he has a deal with Adidas and over 200,000 Instagram followers, where he shows his legions of fans just how fashion-conscious he is. His trademark celebration is to cross his middle and ring finger and hold his hand up to his face, so expect that one on FIFA next season.

Currently, Bergwijn has the weight of wearing PSV's number 10, which he's unlikely to prise off Harry Kane at Spurs - he'll probably ask for a "cool" number, should he move, and should cool numbers exist.

With Tottenham expanding further with commercial deals - think the Nike kit sponsorship, their lucrative AIA partnership and connections made with the NFL thanks to the new ground - Bergwijn could well become the posterboy that Spurs use to advertise their next home shirt.

QUIZ Can you name every FA Cup-winning starting XI of the 2010s?