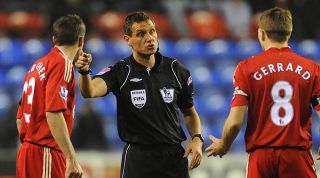 It feels like FFT can’t get through an interview without poor Jamie Carragher coming under fire from his old team-mates these days.

Only in the new issue of the magazine, ex-Red Luis Garcia revealed how part of his work with a sports psychologist involved trying to block out Carra’s voice (“I used to mutter f*** off under my breath when he yelled at me,” chuckled the Spaniard).

Now his old mucker Steven Gerrard has explained to FourFourTwo how nobody was safe from the former centre-back’s charms – especially if they were wearing black.

“Carragher was always moaning at the referees trying to influence decisions,” said BT Sport pundit Gerrard. “He used to hate getting beat, and if he could cut any corner he would.”

It’s not all abuse for Carra, mind: Gerrard was also quick to point out that nobody worked harder than the man he shared a first-team dressing room with for 15 years – which is more than he could say for Fernando Torres.

“I think Jamie probably worked the hardest – every day he used to train the way he played; he’d always be oozing with sweat and pushing himself to the maximum. He was a really good trainer,” said Gerrard.

“Fernando Torres was a bit up and down in training but he came alive as soon as he got on a full pitch and was awesome. He’s one of the best players I ever played with – a player who liked big spaces.”

Hit play on the video above to find out more interesting titbits about Gerrard’s Liverpool team-mates, featuring the man who never gave the ball away… and the local lad who had no intentions of shirking a tackle in training.

BT Sport is where the best in domestic and European football go head to head, with live coverage of the Premier League, Emirates FA Cup and as the exclusive home of the UEFA Champions League and UEFA Europa League. For more information, visit http://sport.bt.com/