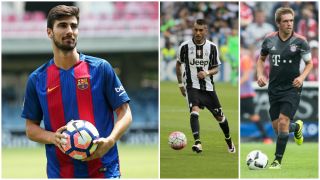 Adidas led the way with their change kits for Wales at Euro 2016 and Chelsea 2016/17, but with Bayern they’ve added a third tone and swapped bitter lime for zesty orange. Fanta-stic.

This refined effort comes pretty close, though, despite some unwieldy wording accompanying the crest.

And check out the innovative swopping collar, resembling a mayoral chain superimposed on a kestrel’s beak. Just us?

The Tricolor are no strangers to sleek kits, and here, their white, black and red hues are tastefully lifted by an embedded background design.

The simple, sponsor-less tribute to Barcelona’s first European Cup win, 25 years ago, should go down as a timeless classic.

A restrained design template, juxtaposed with subtly shaded stripes-within-stripes, topped off with a sumptuous collar? Yes please. The slightly naff sponsor is a pity, though.

The classic shirt, set in a marginally darker blue and accompanied by a dizzying ripple motif, is really brought to life by golden touches – so much so, even the yellow socks work. That may not be a popular opinion, however…

Returning to 2014/15’s yellow change strip is a good move for Palace, and sashes always look great on away kits, where they can’t upset a club’s traditional colour balance. And look at the collar! This is everything the disappointing home strip isn’t.

See, Macron, you can do red and blue stripes! Bologna’s kit is lush in its simplicity. You won’t find many striped kits with a better collar and sleeve design.

This is a beauty. For a black-and-white shirt there’s a lot going on, but it avoids resembling a barcode. While Juve aren’t alone in featuring Adidas’ trademark three stripes down the sides, not the shoulders, it works particularly well here.

Gone forever – or at least temporarily – are garish keeper jerseys. Printing nerds such as FFT will call the colour scheme CMYK (cyan, magenta, yellow, black), but all that really matters is that it’s niiiiice.

This season Bayer Leverkusen – backed by a pharmaceutical giant, don’t forget – swapped big boys Adidas for local lads Jako, and the result is a swish switch to black.

Aberdeen’s bid to match or even improve on second place, despite Rangers’ arrival, will look especially sexy on the road.

There’s a lot to like here, be it the colour contrasts, the thin horizontal lines, or the continuing shirt-to-shorts stripe. Lovely.

Tottenham’s third kit for 2016/17 is a gold monstrosity, but their primary two uniforms more than make up for it.

We especially like what Under Armour have done with the change strip: clean and understated, in just the right shades.

Crikey. Where to start? No, really: ‘where do we start?’ must have been the first thing Nike said when beginning this conceptual design.

The shirt incorporates everything from zodiac signs and the popular Central Library’s circular patterns (representing the contrasting heliocentric and geocentric theories of Copernicus and Ptolemaeus, obviously) to traditional Mexican imagery and a 16th-century city map, creating an astounding tribute to astronomy and astrology that, most importantly, looks incredible. It’s impressive Nike even managed to find space for their swoosh.

Buy this. Buy this now.